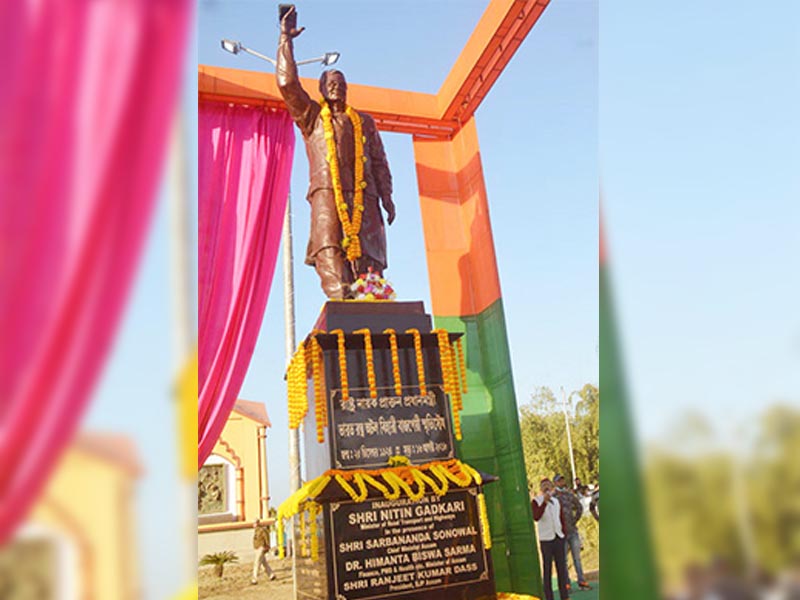 SILCHAR: Union Minister for Road Transport and Highways, Nitin Gadkari unveiled a bronze statue of former Prime Minister Bharat Ratna Atal Bihari Vajpayee at the zero point of the Silchar Saurashtra Mahasadak in the presence of Chief Minister Sarbananda Sonowal here on Friday and paid rich tributes as well. Also, as a part of the event, the Union Minister announced that like in Jogighopa, a Multimodal Logistics Park (MMLP) will be set up in Barak Valley soon.

While addressing a public meeting on the sidelines of the statue unveiling ceremony via remote control, Gadkari said “Along with two more bridges, a Multi-Modal Logistics Park will soon come up in Barak Valley as well.”  He also recalled his long association with the late Prime Minister and shared some key moments spent working with the visionary leader. “I am thankful to Assam Chief Minister for inviting me to unveil the statue of Atal ji who has been my philosopher and guide,” an emotional Gadkari maintained. Sonowal said the unveiling of the statue of the great leader would inspire and motivate the young generation to work towards nation-building. The Chief Minister said during the tenure of Vajpayee ji the East-West Corridor connecting Saurashtra with Silchar was envisioned and that he worked for the poor people of the country.