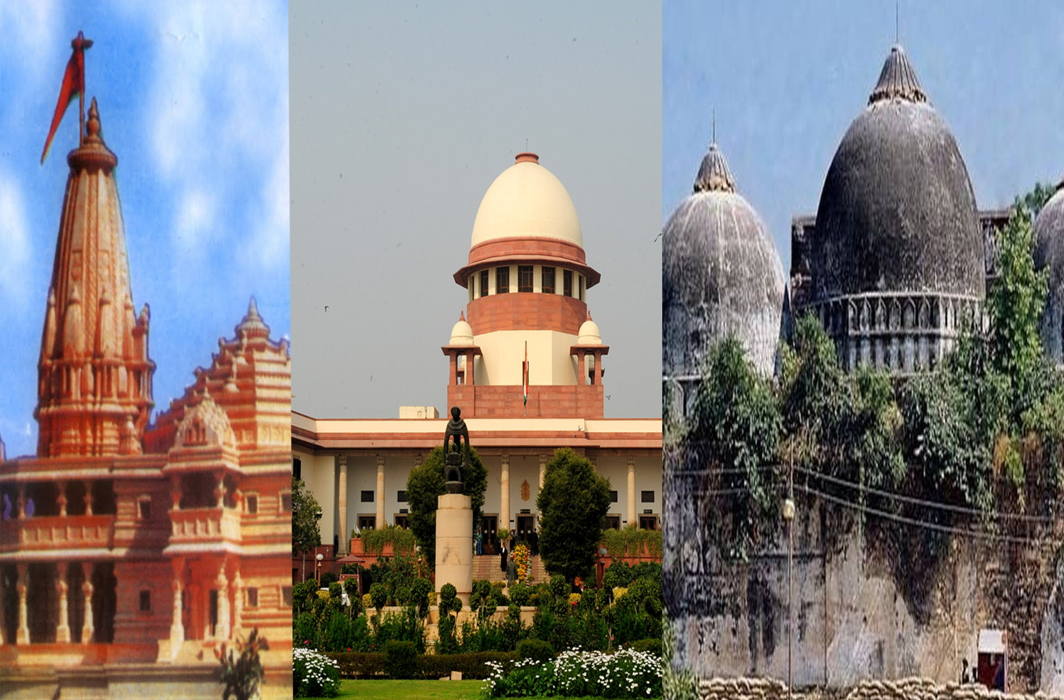 The daily hearings in the decades old temple-mosque dispute in Ayodhya came to an end at the Supreme Court this afternoon after 40 days. The verdict in the case – which has dominated politics and the headlines for decades – is expected to come before November 17, when Chief Justice Ranjan Gogoi, who is leading the five-judge constitution bench hearing the case, is slated to retire.
The judges had been sticking to a strict timeline after attempts to sort out the case through mediation failed. Over the last weeks, they have extended the timing of the hearings and rebuked the advocates for spinning it out.

This morning, Chief Justice Ranjan Gogoi, declaring “Enough is enough” after a lawyer asked the top court for more time for arguments, said they would finish the hearing by 5 pm. Justice Gogoi had earlier expressed concern that in the current schedule, there would hardly be time to write the judgment.

On the last day of hearing, there were dramatic moments as a senior lawyer tore up a map and relentless interruptions infuriated the judges.

Rajeev Dhavan, representing Muslim petitioners including the Sunni Waqf Board in the title suit, tore up a pictorial map showing the Ram Janmasthan after asking the court’s permission. He said the map, forwarded by the Hindu petitioners, could not be submitted as evidence since the court had earlier refused to accept it.

Following the commotion it caused and interruptions from both sides, Chief Justice Ranjan Gogoi threatened to walk out.
The six-decade dispute involves 2.77 acres of land in Ayodhya, which right-wing activists believe was the birthplace of Lord Ram. In December 1992, right-wing activists razed a 16th Century mosque which stood at the spot. The activists believed that the mosque was built by Mughal Emperor Babur after demolishing a temple that marked Lord Ram’s birthplace. In the days that followed, 2,000 people died in riots across the country.

The five-judge Constitution bench began day-to-day hearings on August 6 after mediation proceedings by a court-appointed three-member team failed to find an amicable solution to the dispute.

The team — comprising former Supreme Court judge FM Kalifulla, spiritual guru Sri Sri Ravishankar and senior advocate Sriram Panchu – told the court that “some parties” were not ready to sort out the issue through mediation. This morning, the team presented their final inputs on the issue to the court in a sealed cover.

The Muslim respondents have said that there was no claim for the title of the land in Ayodhya by Hindus until 1989. They asked for the restoration of the Babri Masjid as it stood before it was demolished in December 1992. The Hindus have contended that a mosque can be built anywhere, but there is only one birthplace of the Lord Ram.

Fourteen appeals have been filed in the top court against the 2010 Allahabad High Court judgment, delivered in four civil suits, that the 2.77-acre land be partitioned equally among the three parties – the Sunni Waqf Board, the Nirmohi Akhara and Ram Lalla.

A campaign for the Ram temple at Ayodhya had propelled the BJP into a major political force in the 1990s. Ahead of the coming national election, the temple issue again vaulted to the forefront. Right-wing groups pushed for fast-tracking the temple through an ordinance or executive order passed by the government. But Prime Minister Narendra Modi said no decision can be made until the judicial process is over.

Accusing the Congress for delaying a decision on the issue for 70 years, PM Modi said, “We have said in our BJP manifesto that a solution would be found to this issue under the Constitution… Let the judicial process be over. After the judicial process is over, whatever be our responsibility as government, we are ready to make all efforts”.