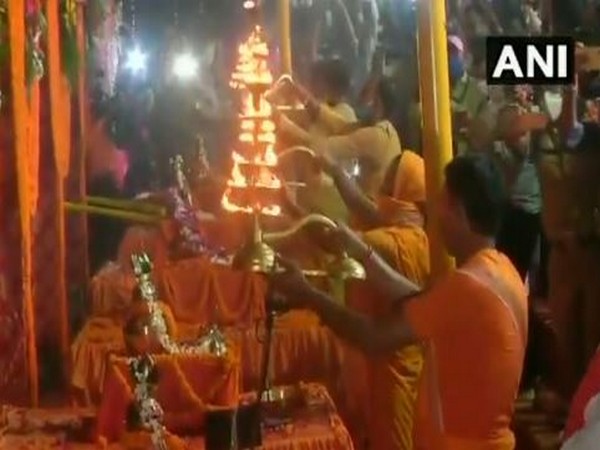 Ayodhya: Ahead of foundation laying ceremony of Ram Temple on August 5, festivities have begun in Ayodhya which will host several national leaders including Prime Minister Narendra Modi.

A bridge over Saryu river was illuminated and priests performed ‘aarti’ at the ghat of the river and temples were decorated with lights as part of the celebrations.

Temples across the city were decorated with lights and diyas ahead of the grand event.

Sharan Das Maharaj, priest of Rang Mahal shared that ‘Deepotsav’ will be celebrated like “never before” on August 5.

“I am associated with Ram Janamabhoomi Aandolan for a long time. We have struggled a lot for this day. We are doing preparations in the Rang Mahal and will observe Deepotsav like never before. Ayodhya will become synonymous with Deepawali. I am feeling fortunate that I will witness the construction of Ram temple,” Maharaj told ANI.

“VHP’s Ashok Singhal used to come here Rang Mahal often. This palace was given to Kaushalya to Sita. It is our fortune that PM Modi is a leader who does not have biases. CM Yogi visited here today to take stock of the preparation for the foundation laying ceremony,” he added.

Yogi offered prayers at the Hanuman Garhi temple during his visit to Ayodhya to take stock of the preparations for the ‘bhoomi pujan’.
He along with officials also visited Ram ki Paudi to inspect the arrangements ahead of the foundation stone laying ceremony.

PM Modi is scheduled to lay the foundation stone of the Ram Temple in Ayodhya on August 5. (ANI)