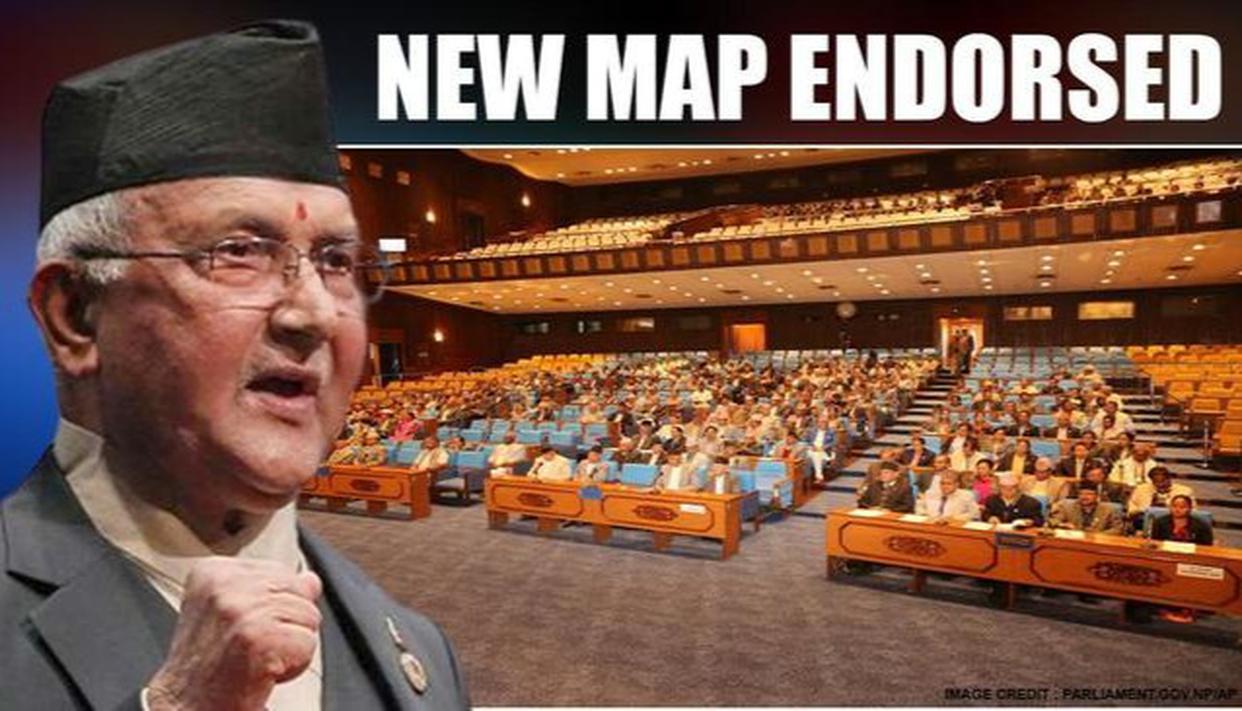 Nepal’s Parliament on Saturday unanimously voted to amend the Constitution to update the country’s new political map, laying claim over the strategically key areas of Lipulekh, Kalapani and Limpiyadhura along the border with India.

The major opposition parties, including Nepali Congress (NC), Rastriya Janata Party-Nepal (RJP-N) and Rastriya Prajatantra Party (RPP), voted in favour of the government bill to amend Schedule 3 of the Constitution to update the national emblem by incorporating the new controversial map.

A two-thirds majority was required in the 275-member House of Representatives or the lower house to pass the bill.

On June 9, the Parliament unanimously endorsed a proposal to consider the Constitution amendment bill to pave way for endorsing the new political map amid the border row with India.

After the National Assembly passes the bill, it will be submitted to the President for authentication, after which the bill will be incorporated in the Constitution.

The government on Wednesday formed a nine-member team of experts to collect historical facts and evidence related to the area.

Diplomats and experts, however, questioned the government’s move, asking why the task force was formed when the map has already been released and approved by the Cabinet.

Just two days ahead of voting, Ministry of External Affairs spokesperson Anurag Srivastava had sidestepped all questions regarding the voting or reaching out to Kathmandu by just saying “we have already made our position clear” and went on to elaborate on the “civilisational, cultural and friendly relations with Nepal”.

This despite the fact that Nepal PM KP Sharma Oli just one day before this statement said that if India showed more willingness for dialogue, a solution could be found. India had also stressed on a diplomatic dialogue in the May 20 statement but foreign secretary-level talks still remain pending between the two sides.

Meanwhile, Srivastava highlighted the help extended by India to Nepal in fighting the Covid-19 pandemic. He said, “We have supplied about 25 tonnes of medical aid to Nepal, including Paracetamol and hydroxychloroquine (HCQ) medicines, test kits and other medical supplies.” Nepal was in the first list of countries for whom India cleared the export of HCQ after it was moved to the licensed category. He also pointed out that India had helped in the repatriation of Nepalese nationals stranded abroad on humanitarian grounds.

Most significantly, he emphasised that “government of India has also ensured that there is no untoward disruption in trade and supply of essential goods to Nepal, despite the lockdown on both sides”.

Disruptions in supply in 2015 had resulted in a serious friction between India and Nepal. India had denied that it had called for any blockade against Nepal and had constantly stressed that Madhesh protestors had blocked the borders, leading to trucks with essential supplies being stuck on the India side. However, Nepal accused India of pushing an economic blockade that had resulted in misery to its hill population that was dependent on supplies of LPG and other essentials from India.

Meanwhile, on Friday, a highly unusual incident occurred on the Indo-Nepal border in Sitamarhi, Bihar. The Nepal APF opened fire after an altercation over what was described as a “local” and “completely avoidable issue” by SSB’s 51 battalion commandant. There were 15 rounds of firing in which one person died. Villagers alleged that the Nepal police asked them to not wander around the border as they are spreading coronavirus in Nepal. However, the official version suggests that they were stopped from moving around as there is a lockdown in Nepal till June 14.

This “local” incident curiously reflected the sentiment expressed by Oli a few weeks ago wherein he had accused Indians of spreading Covid-19 in Nepal, suggesting that the Indian strain was more virulent than the one from China and Italy.

Oli is perceived to be leaning towards Beijing. His disagreements with India are not new. In his earlier stint as PM, he had accused India of toppling his government in 2016.

However, his return to power in 2018 was marked by renewed efforts from both sides to improve equations. India also stepped up cooperation in the oil and gas sector. A 69-km pipeline with a capacity of 2 mmta connecting Motihari in India to Amlekhgunj in Nepal was jointly inaugurated by PM Modi & Oli in September 2019. It was the first cross-border petroleum products pipeline in South Asia and the cost of constructing the pipeline — Rs 324 crore — was borne by Indian Oil Corporation Limited. The project was completed by IOCL way ahead of the schedule too.

The latest friction occurred after India inaugurated the 80-km-long link road on the Kailash Mansarovar route in Pithoragarh in Uttarakhand. Nepal objected to it, saying it falls in their territory, a claim India instantly refuted saying the entire stretch is well within India territory. Army chief General Naravane had indicated that Nepal’s move comes at the behest of China.