Protests against CAB in NE states 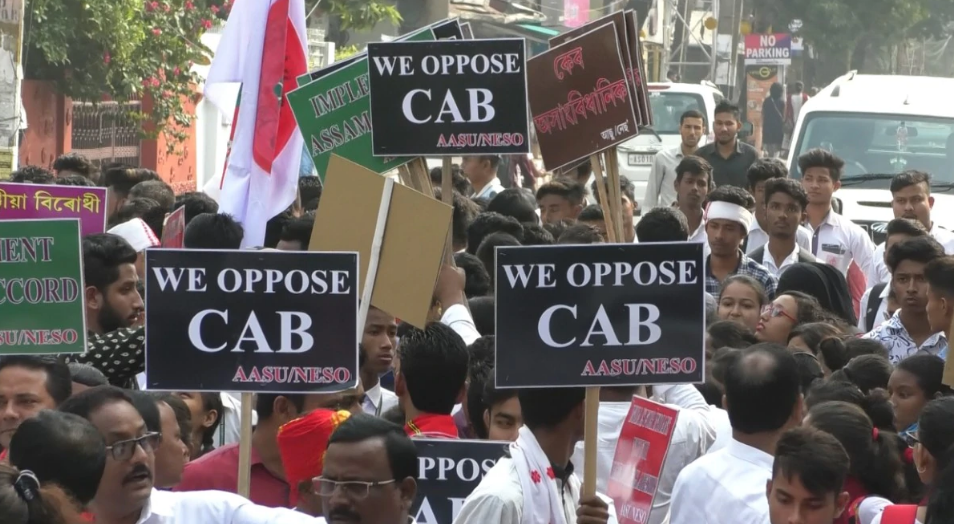 Thousands of people under the banner of North East Students’ Organization (NESO) today staged protest against the contentious Citizenship Amendment Bill (CAB) across the North-east.
The protesters made it clear that the North-east was not a dumping ground to shelter illegal migrants and that under no circumstances would such a move be tolerated by the region’s people.
“We totally oppose the Bill and we demand that the Bill should not be brought back but instead Inner Line Permit (ILP) system should be introduced for the entire region. The National Register of Citizens (NRC) with a base year for each State should be implemented and also constitutional safeguards should be granted to the people of north-eastern States, delegating a vast federal authority to the States including rights over land and natural resources,” the NESO leaders said.

The protesters later submitted memorandums to Prime Minister Narendra Modi and Home Minister Amit Shah through the Governors of the States. In Guwahati, the protesters who included AASU president Dipanka Nath, general secretary Lurinjyoti Gogoi and adviser Dr. Samujjal Bhattacharya besides a host of eminent personalities from diverse fields marched to Raj Bhawan and submitted a memorandum to the Governor.

“We express our dismay and displeasure that the Government of India has again intended to introduce the contentious Citizenship (Amendment) Bill in Parliament. The entire north-eastern region is infested with foreigners from erstwhile East Pakistan and now Bangladesh. They have infiltrated into and polluted every aspect of our social life. The politicians have supported them which threatens the identity of the indigenous peoples of the region,” the NESO said in the memorandum.

Pointing out that all the north-eastern States have suffered badly due to illegal influx, the NESO said that several of the States had taken the load of illegal Hindu migrants from Bangladesh and any attempt to impose the burden of the post-1971 Hindu Bangladeshis as was sought under the CAB would destroy the socio-political fabric of the region.

“The North-east is not a dumping ground for illegal Bangladeshis and to us a foreigner is a foreigner irrespective of his religion. The proposed Bill will defeat the very purpose of signing the Assam Accord which was fully supported by the NESO in setting March 25, 1971 as the cut-off year for detection and deportation of the foreigners from Assam. We oppose the objective of the Bill and it must not be adopted by Parliament under any circumstances. Such an undesirable step by Parliament will once again agitate the entire North-east,” it added.

“Our social structure, our history and our cultural values are unknown to the rest of the country. The Bill is the latest example that the lawmakers of the country have no regard for the future of the indigenous peoples of the North-east,” it said.