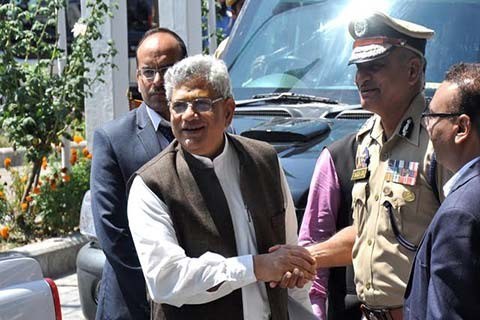 A Kashmiri student who wants to meet his parents and Left leader Sitaram Yechury should be allowed to visit Jammu and Kashmir, the Supreme Court ruled today, hearing petitions against the end of special status to the state under Article 370 and travel and security restrictions in place for nearly a month.
“The petitioner student Mohammad Aleem Sayeed shall be allowed to travel to Jammu and Kashmir and visit Anantnag and visit his parents and file an affidavit after his return,” the top court said, ordering the government to facilitate his travel and give him adequate protection.

Sayeed, a law student from the Jamia Millia Islamia university, had petitioned the court that he had not been able to travel to Srinagar and had no idea how his parents were. He had expressed his fear that his parents may have been detained.

On CPM leader Sitaram Yechury’s petition to meet with his party colleague Yousuf Tarigami, Chief Justice Ranjan Gogoi said: “We will allow you to visit. You are going only to meet your friend? A citizen of this country wants to meet his friend. What’s the difficulty?”

Mr Yechury had petitioned the court to be allowed to visit the former MLA, saying he was not in good health. He had tried twice before to visit Jammu and Kashmir – he was part of the opposition delegation that flew to Srinagar on Saturday – but both times, he was turned away from the airport.

The centre argued that Mr Yechury’s “appears to be a political visit and it will adversely affect the situation” in Jammu and Kashmir.

The situation was normal in Jammu and Kashmir and his visit would endanger peace, said the government’s lawyer, Solicitor General Tushar Mehta. “Yousuf Tarigami is hale and hearty and his condition is checked daily, he is under z category security,” he asserted.

“If he is a citizen of this country, he will go,” the Chief Justice said, adding that if Mr Yechury “indulges any other issue it will be treated as a violation of the Supreme Court order.”

The court also asked Mr Yechury to file an affidavit on Mr Tarigami’s condition on his return.

“The Supreme Court has permitted me to go to Srinagar and see Com Yousuf Tarigami and “report” back to them on the condition of his health. Once I meet him, return and report to the Court, I will make a more detailed statement,” Mr Yechury tweeted.

The Supreme Court has permitted me to go to Srinagar and see Com Yousuf Tarigami and “report” back to them on the condition of his health. Once I meet him, return and report to the Court, I will make a more detailed statement.

Jammu and Kashmir has been under strict restrictions since the government announced its decision on Article 370 on August 5. In an attempt to avoid any backlash, phone and internet connections were suspended, more than 50,000 additional troops were stationed and large gatherings were banned. Hundreds of political leaders have been arrested, including former Chief Ministers Omar Abdullah and Mehbooba Mufti.

Mohammad Aleem Sayeed said approaching the Supreme Court was his last resort after he failed to establish any contact with his parents. “I am a law graduate. What would be the point of studying law if I didn’t know my rights?”