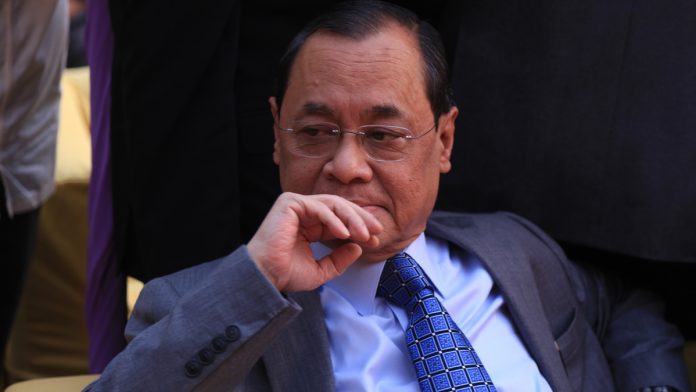 New Delhi: A Supreme Court advocate has made a stunning claim about the sexual harassment charges levelled against Chief Justice of India Ranjan Gogoi. The lawyer, Utsav Bains, has alleged that he was approached by an unidentified man to organise a media conference to “frame” the CJI at the Press Club of India, and to represent the former Supreme Court staffer who has accused Gogoi. In exchange, he claimed, he was offered up to Rs 1.5 crore.

Speaking to news agency ANI, Bains alleged this was a conspiracy by some people who want the CJI to resign. He said he would file an affidavit narrating his experience in the apex court, and added that he would name those allegedly involved.

ThePrint repeatedly tried to get in touch with Bains, but he was unavailable for further comment. However, it is learnt that the draft of the affidavit is being prepared, and will be filed at the earliest.

Facebook post
Bains’s announcement about filing an affidavit comes a day after his startling admission in a Facebook post, where he said: “I was offered bribe to help frame CJI in the sexual harassment case by lawyering and organising a press conference against the CJI for the ex-SC staffer who has accused the CJI of sexual harassment just a few days back and also specifically asked to organise a press conference only at the Press Club of India.”

Bains posted this hours after news of the staffer’s allegations of sexual harassment came out.

He had added: “…(He) claimed to be her relative but on the other hand looked like a trained agent and he also couldn’t satisfactorily reply as to what was his relationship with the ex-SC staffer and then suddenly offered me 50 lacs as my legal fees if I agreed to lawyer and again he asked me specifically to organise a press conference at the PCI after I refused as I found the story facts fishy and also he couldn’t reply to any question about the many loopholes in the story he narrated. When I again refused he said 1.5 cr. I then asked him to leave my office.”

‘Conspiracy’ against the judiciary
Bains claimed that when he “enquired more about this issue from reliable sources in Delhi…every information pointed to a larger conspiracy to make the CJI resign”. He alleged that the “kingpin” of this conspiracy “are many Delhi-based SC fixers or those who engage in cash for judgments”.

“After hours of ponder and soul searching, I have decided to speak the truth and file a detailed affidavit in this regard in the SC along with evidences of the conspiracy against the CJI by a lobby of disgruntled judges, SC fixers, corporate scamsters and a few corrupt politicians – all who have meticulously planned the conspiracy to force the CJI to resign as their corrupt works were not going through in SC,” he claimed.

In-house procedure to address the complaint
News reports suggested Saturday that a 35-year-old woman, who worked as a junior court assistant in the Supreme Court, had written to 22 judges of the apex court Friday, alleging that the CJI had sexually harassed her at his residence last year.

CJI Gogoi Saturday denied the sexual harassment charges levelled against him, suggesting that vested interests were threatening the independence of the judiciary.

There is an ‘In-House Procedure’ mandated to look into the complaint. As per the Sexual Harassment of Women at the Workplace (Prevention, Prohibition and Redressal) Act, read with the Supreme Court Sexual Harassment Regulations, 2013, the designated committee must take cognisance of the complaint and initiate proceedings accordingly.

At the moment, the decision of the committee is unclear. ThePrint tried to contact Justice Indu Malhotra, who heads the committee. However, there was no response.