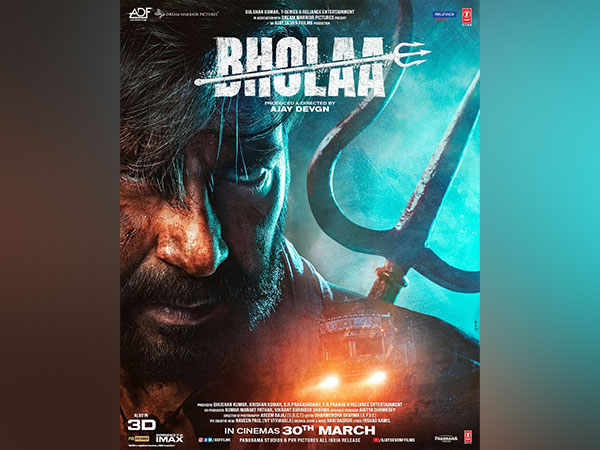 One teaser is not enough now! Filmmakers nowadays keep their fans engaged with more than one teaser before the final trailer hits the screen.

Actor-director Ajay Devgn treated his fans on Wednesday with the second teaser of his upcoming directorial ‘Bholaa’. The teaser promises high-octane action sequences that will drive the viewers’ adrenaline. Cars fly, cars collide with each other and the tough fight between Ajay and his opponents on the screen will surely entertain the fans.

Taking to Instagram, Ajay posted the teaser of ‘Bholaa’ and captioned it as, “Jab ek chattaan, sau shaitaanon se takrayega…”

Ajay’s wife Kajol also took to Instagram to share the video with the same caption.
‘Bholaa’ is an official Hindi remake of the Tamil hit ‘Kaithi’. It has been styled as the story of a “one-man army, set in one night, fighting a multitude of enemies in various forms, human and otherwise.”

The original film revolved around an ex-convict who decides to meet his daughter for the first time after being released from prison but gets caught in a face-off between police and the drug mafia.
‘Bholaa’ marks Ajay’s fourth directorial film after ‘U, Me aur Hum’ in 2008, ‘Shivaay in 2016, and ‘Runwav 34’ in 2022.

The second teaser also introduces Tabu in her action element as a cop, Deepak Dobriyal as the key villain, Sanjay Mishra as the grey cop, and Vineet Kumar, Gajraj Rao, amongst others.
Like the first teaser, the second teaser also ends with Ajay rambling his bike into a car before jumping onto it with a Trishul in his hand.

‘Bholaa’ is another name for Lord Shiva. Showing Ajay with a Trishul, the teaser hints at exploring such a possibility in the film. (ANI)