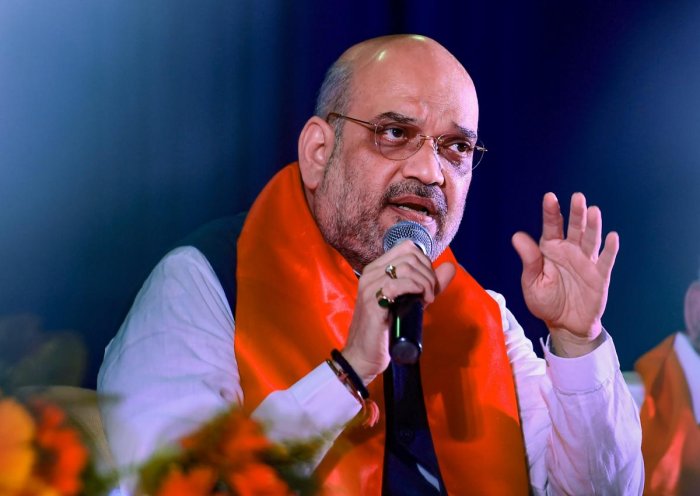 BJP president Amit Shah on Thursday accused the opposition Congress of trying to politicise the Pulwama terror attack. The Congress has alleged that Prime Minister Narendra Modi was busy with a “film shoot” when he should have chaired a cabinet meeting on security.

Amit Shah said the Congress has no moral right to question the BJP on patriotism. “Congress has used this attack for their political interests. They created an issue of the PM Modi’s presence in a programme on the day of attack. They should know that PM Modi works for 18 hours in a day for the nation,” said Shah who was addressing a public rally in Andhra Pradesh’s Rajahmundry. (Follow live updates here)

The BJP boss said the Congress may continue to politicize the Pulwama attack but it will not benefit them. Amit Shah wondered how a party whose leader Navjot Singh Sidhu “spoke for Pakistan” dared to target the Prime Minister.

The Congress had asked why PM Modi had not announced a national mourning in honour of the deceased CRPF jawans. “At 3.10 pm when the Pulwama attack took place and was all over the news, PM Modi was shooting for a film till 6.45 pm in Corbett national park. For 4 hours after the terror attack, PM Modi indulged himself in a film shoot, went on boat rides and had his tea and samosas,” Congress spokesperson Randeep Surjewala said.

BJP president Amit Shah said the Narendra Modi government has a “zero tolerance” policy towards terrorists. He said the Prime Minister has given the security agencies a free hand to hit back after the Pulwama attack.

“Chandrababu Naidu goes on sitting on dharna in Delhi, Bengal, Tamil Nadu and Karnataka. If he wishes to sit on dharna then he should sit in front of his party office which in the past five years did not work for the development of the state,” said Amit Shah in Andhra Pradesh.