GUWAHATI: and United Liberation Front of Asom—Independent (ULFA-I) threatened to kill the two abducted employees of ‘Quippo oil’ company as their demands have not been fulfiled by the Government and the Quippo Oil and Gas Infrastructure Limited.

ULFA-I in a statement issued on Friday informed about their decision regarding the two kidnapped Quippo employees.

The NSCN (IM) and United Liberation Front of Asom—Independent (ULFA-I) kidnapped Quippo’s radio operator Ram Kumar who hails from Bihar and drilling superintendent Pranab Kumar Gogoi, of Sivasagar in Assam. The duo was kidnapped by armed militants on December 21 from a drilling location in Diyun under the Changlang district of Arunachal Pradesh. ULFA-I has set a huge price in exchange for the release of the two employees. 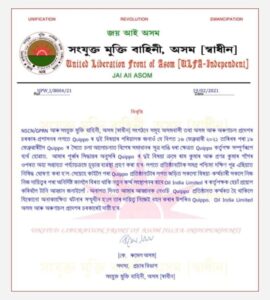 Earlier, the United Liberation Front of Asom—Independent (ULFA-I) also released a video of the two kidnapped employees of the Quippo Oil and Gas Infrastructure Limited showing the employees appealing to the Chief Ministers of Assam and Bihar to secure their early release.

Later, in a statement released on 27 January, ULFA-I threatened the company and authorities of Assam and Bihar saying that the concerned parties have not taken any special measures for the release of the two oil officers.