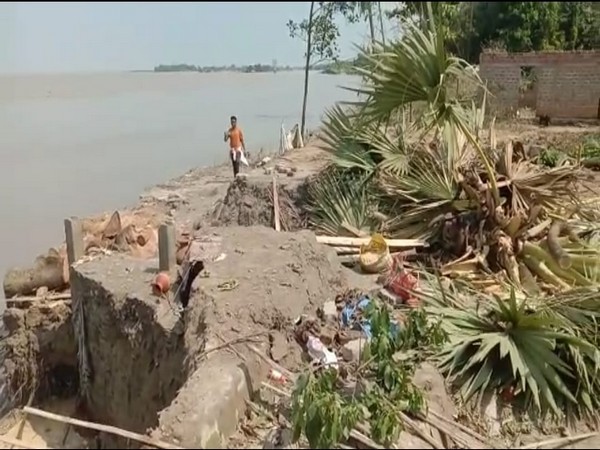 Till September this year, the village of 1 No Murkata under the Mayang revenue circle of central Assam’s Morigaon district could be seen bustling with people. Now there exists no trace of the village. The mighty Brahmaputra river swallowed the entire area.

Over the past three months, houses of around 40-50 families, one school building, two temples and a government building have all been swept away. The villagers were forced to move to safer places. According to locals, an area of 300 meters along the river bank had been eroded by the river over the period.

“We lost everything in the river erosion. The river swallowed our house, lands, everything. We don’t know where to go, or what to eat. We are now living in temporary sheds we have erected on other people’s land. What else will we do? We have no land,” said Golapi Mandal, a local of 1 No. Murkata village.
Many residents of that village have now moved to other places.

Another villager Kalicharan Mandal said that the Brahmaputra river has eroded around 40-50 houses in the village. “The river swallowed the school building of 1 No. Murkata Lower Primary and ME school, a Durga temple, a Namghar, a public hall, and a Kali temple. Now 10-20 families are taking shelter in nearby areas and others have moved to other places. The massive erosion was started after Durga Puja festival this year,” he said.

The headmaster and other teachers of 1 No. Murkata Lower Primary school are now running the school in a temporary shed made by the teachers after the Brahmaputra river wholly washed away the school building. There are 100 students in the school who are now studying in this temporary shed constructed a few days back.
Binita Barman Kalita, a teacher at 1 No. Murkata LP School said, “We are trying to provide education to our students in the temporary shed. If the government takes necessary action on this matter, it will be better for us.”

“Our school was in a good environment, but the entire village along with the school building were washed away due to erosion. We have made this temporary shed for the students so they do not miss their classes and are not deprived of education. The massive erosion started in the first week of October and still continuing. Many villagers have moved to other places and their children are coming to our school from distant places. We are facing huge problems,” the teacher said.

According to the Assam government data, the state has so far lost about 4.27 lakh hectares of land to the soil erosion of the Brahmaputra river and its tributaries. (ANI)