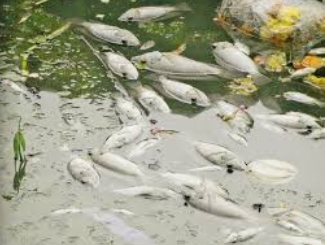 After seven day long Ganapati festival thousands of dead fishes were noticed on the beaches of Mumbai.

According to sources, immersion of Ganesha idols with harsh chemicals and plaster of paris along with other non environment friendly materials were one of the main reasons behind the death of the sea fishes.

The ratio of dead fishes might even increase after the eleventh day of the Ganpati immersion as many people follow this festival for whole eleven days.

It will be important to mention that through last year’s cleanliness drive around 1080 Metric Tonnes of garbages and non environment friendly materials were picked up from the Mumbai beaches after Ganesha festival by volunteers.

This year Popular Bollywood stars Vivek Oberoi and Dia Mirza were seen joining the volunteers in the cleanliness drive and around 400 Metric Tonnes of garbages have been collected so far by more than 1200 Citizens of Mumbai in terms of disposing them to some other place later.