Veteran actor Dharmendra Deol on Wednesday introduced his grandchild Rajveer Deol to the world of cinema and announced his debut project with filmmaker Avnish Barjatya‘s first movie as a director.

The ‘Sholay’ actor took to Instagram and shared a couple of pictures featuring Rajveer. He urged his fans to shower love on Rajveer and Avnish as they step into the world of Indian cinema. The title of the film is still kept under wraps. 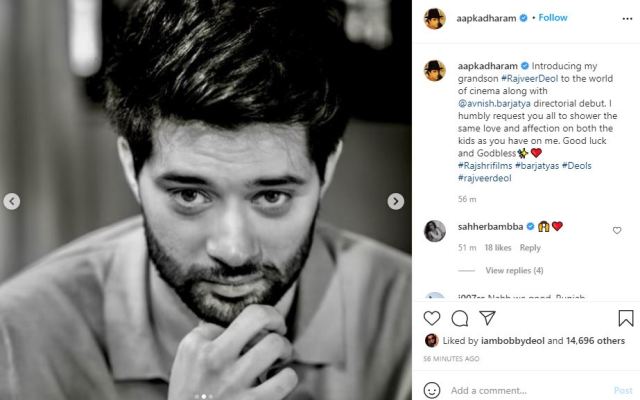 “Introducing my grandson #RajveerDeol to the world of cinema along with #Avnishbarjatya directorial debut,” wrote the ‘Dharam Veer’ actor.

“I humbly request you all to shower the same love and affection on both the kids as you have on me. Good luck and Godbless#Rajshrifilms #barjatyas #Deols #RajveerDeol,” he added.

Celebrity followers including Bobby Deol and more than 14 thousand fans liked the post. Scores of fans sent in congratulatory messages in the comments section for the debut project.