Celebrating their ‘bapu dearest’, daughters Shruti Haasan and Akshara Haasan took to their social media to pen heartfelt birthday wishes for him.

Taking to her Instagram handle, Ulaganayagan’s elder daughter- actor Shruti dug out a priceless monochrome childhood picture featuring the father-daughter duo. Alongside the picture, she wrote, HAPPY BIRTHDAY!! @ikamalhaasan may this year and many more to come be filled with your signature brand of joy, magic and artistry lots of love and can’t wait to see the incredible things you have in store for us !!!” 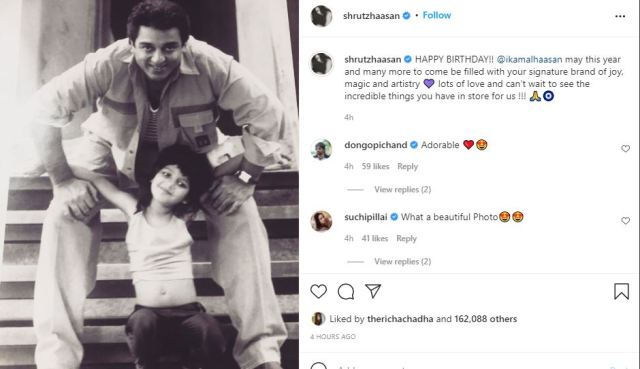 Kamal’s younger daughter Akshara also took to her Instagram handle and shared a series of pictures featuring her legendary dad.
The first picture is a throwback picture of Kamal dressed as the famous Laxmi Godbhole character from the 1977 film ‘Chachi 420’. Toddler Akshara and Shruti could also be seen posing with their father in the snap.

The second picture is the solo picture of the National-award winning actor. Kamal looks dashing as always as he poses for the camera from what appears to be a picture from his shoot set.
The third all smile picture is the recent one featuring Akshara hugging his dad while posing for the lens.
Sharing the picture, Akshara wrote, “Happiest birthday to my bapu dearest. I’m blessed to have learnt so much about life and its different perspectives through your work. The heart with which you drive your passion has inspired me to be the best in what I chose to do. Happy Birthday My Rockstar, Bapuji. @ikamalhaasan.”

For the unversed, Kamal Haasan shares daughters Shruti and Akshara with his ex-wife- actor Sarika, with whom he parted ways in 2004.
Fondly called a ‘universal hero’, Kamal Haasan started his acting career when he was just six with the 1959 film Kalathur Kannama. He was awarded the prestigious President’s Gold Medal for his role as an orphaned child in the film.

Apart from being an actor, he is a dancer, singer, director, producer, lyricist, and politician too, who has worked in Tamil, Telugu, Hindi, Malayalam, Kannada, and Bengali films.
The actor has bagged more than 4 National Film Awards and more than 15 Filmfare Awards throughout his acting career. His best works include films like: ‘Hey Ram’, ‘Chachi 420’, ‘Moondram Pirai’, Mani Ratnam’s ‘Nayakan’ and more.

He has also been a recipient of Padma Shri and Padma Bhushan, the fourth and third highest civilian honours awarded by the Government of India respectively.
He formed the centrist party Makkal Needhi Maiam (MNM), a regional political party in Tamil Nadu. Kamal began his political journey from late President A. P. J. Abdul Kalam’s residence and his memorial at Rameswaram.

Meanwhile, on the film front, Kamal will be next seen in the much-anticipated action thriller film ‘Vikram’ written and directed by Lokesh Kanagaraj and produced by Raaj Kamal Films International.
The film also features Vijay Sethupathi, and Fahadh Faasil in the lead roles along with Shivani Narayanan, Kalidas Jayaram, Narain, Antony Varghese, and Arjun Das in supporting roles.
The movie that marks Lokesh’s first collaboration with Kamal Haasan is slated to hit the screens worldwide in April 2022. (ANI)