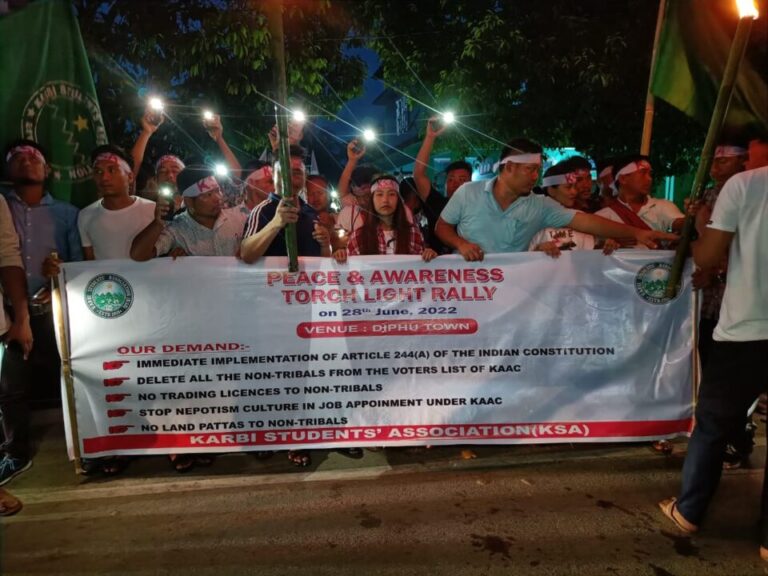 Demanding immediate implementation of Article 244(a)- grant of Autonomous State, the Karbi Students Association (KSA-Thangsing Timung) took out a rally on Tuesday evening.

The torchlight procession in Diphu is part of the KSA’s Peace and Awareness Rally in which the KSA demands immediate implementation of Article 244(a) of the Indian Constitution for granting of Autonomous State for the hill districts of Assam, deletion of names of non-tribals from voter list of Karbi Anglong Autonomous Council (KAAC), not to issue trading licenses and land pattas to them and to stop nepotism in job appointment under KAAC.
The rally was taken out at around 6.30 pm from KSA office here from Rongthe-ang to Diphu market via through Sirvomu statue and passed through the main thoroughfare of Diphu market, in front of KAAC gate, Semson Sing Ingti Memorial Park and culminated at KSA office.

He further said, “As per the Sixth Schedule of the Constitution of India, there is provision for scheduled tribe communities for the protection of their language, culture, land and forest. But it is quite strange that in the just concluded KAAC election, 2022, the chief minister of Assam, Himanta Biswa Sarma in several election rallies has declared that not only the tribal people, but non-tribal people will be able to own land and possess land pattas. He is suppressing us. We are opposed to what he had said as non-tribal people cannot possess land in Sixth Schedule districts. Non-tribals cannot have trading licenses from KAAC.”

One of the KSA leaders, George Timung said that about 700 KSA activists and members of Diphu regional committee participated in the rally.