The 47-year-old star hopped on to Instagram to share the picture to mark the arrival of summer. 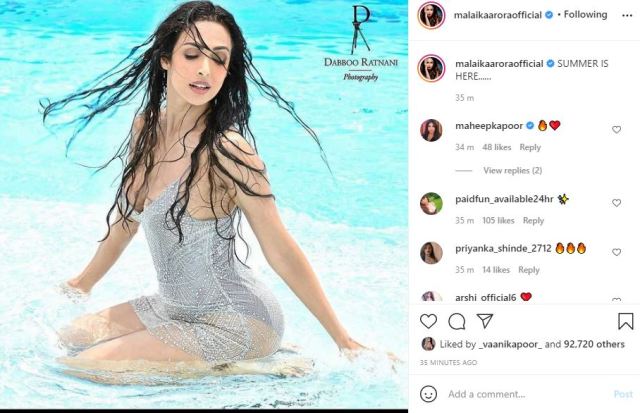 The photo sees Malaika posing in the pool as she donned a skin-hugging designer white see-through dress which put her curves on display. The actor wore minimal makeup with a nude lip shade as she struck a pose with her luscious locks open.

Cheering on the arrival of summer with the sultry post, the mother of one noted in the caption, “SUMMER IS HERE….”

Celebrity followers including Vaani Kapoor and more than 92 thousand fans liked the post within 35 minutes of being posted.

Maheep Kapoor chimed into the comments section and left a fire and red heart emoticon.

Malaika is mostly quite active on social media and regularly updates fans on her activities by posting pictures and videos. Though she is mostly seen busy judging reality shows, she also commands an awesome screen presence which makes her fans go gaga every time she makes an appearance. Malaika is also someone who regularly loves to workout. (ANI)