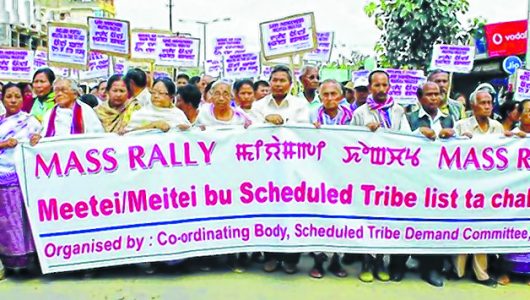 Stating that the movement is to provide constitutional safeguards to the Meitei’s (Meetei) ethnic identity and also to prevent it from becoming extinct, STDCM general secretary L Lokendra said at the public meeting that Meiteis need constitutional protection to bring about a cohesive and harmonious society in Manipur.

STDCM felt that Meiteis will be the only community in the entire North East which will not be included in the ST list after the six tribes of Assam including Tai-Ahom and Tea Tribes are included under the list.

The meeting also adopted three resolutions demanding the State Government to send its recommendation to Centre by March 6 or face a 36-hour general strike on March 9. It also resolved to launch a campaign against those political parties which failed to support the public movement. It further threatened to stop the works of railway line construction from March 11 onwards as part of intensifying its agitation.

Some tribal student bodies have opposed the demands of STDCM saying that it will affect the interests of the tribals in the State.