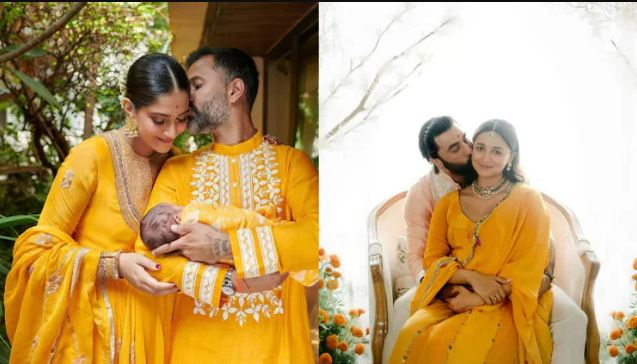 The year is about to end and it’s time to recall the memories of the entire year. This year came with a lot of surprises and notable events for people. Even in Bollywood, the year 2022 came with a lot of ups and downs. While business at the box office went on an on-and-off situation, the personal lives of celebrities did have their own share of happiness. From the beginning of the year, many of our favourite celebrities welcomed the arrival of the newest family members or shared pregnancy news. Many celebrities announced their pregnancies this year from Sonam Kapoor Ahuja to Alia Bhatt and Bipasha Basu Singh Grover.

At a time when Bollywood experienced one of its biggest baby booms this year, check the list of some couples who have or will soon be becoming parents.

Making one of the biggest announcements this year, actress Priyanka Chopra and Nick Jonas welcomed their first child in January 2022. Taking to social media, the star couple announced the arrival of a baby girl through surrogacy. Sharing a note on Instagram, Priyanka revealed the surprise to her fans.

After 5 years of a happy marriage, actor Hazel Keech and former India cricketer Yuvraj Singh welcomed a baby boy in January this year. Sharing pictures with her son, Hazel made the announcement on Instagram.

After sharing their big news earlier this year, Sonam Kapoor and Anand Ahuja became proud parents to a baby boy this August. Sharing the news on her Instagram story, Sonam expressed her gratitude and happiness for the new journey of their lives. Earlier in March 2022, by sharing a picture revealing her baby bump, Sonam announced the pregnancy.

After getting married in October 2020, actor Kajal Aggarwal and her husband Gautam Kitchlu welcomed their first child in April 2022. Kajal gave birth to a baby boy on 19 April 2022 following which the news was announced on Instagram by a relative. Later, the actress also confirmed the big news.

Ending the year on a happy note, Bollywood actors Alia Bhatt and Ranbir Kapoor welcomed their first child this year. On 6 November 2022, the couple announced the arrival of a baby girl. Earlier in June, Alia had taken to Instagram and announced the pregnancy news and left their fans surprised.

On the other hand, TV stars like Bharti Singh and Haarsh Limbachiyaa, Pooja Banerjee and her husband swimmer Sandeep Sejwal, Kratika Sengar and Nikitin Dheer also announced the arrival of their babies in 2022.

Besides that, Bollywood actress Bipasha Basu Singh Grover is also expecting her first child with her husband Karan Singh Grover.