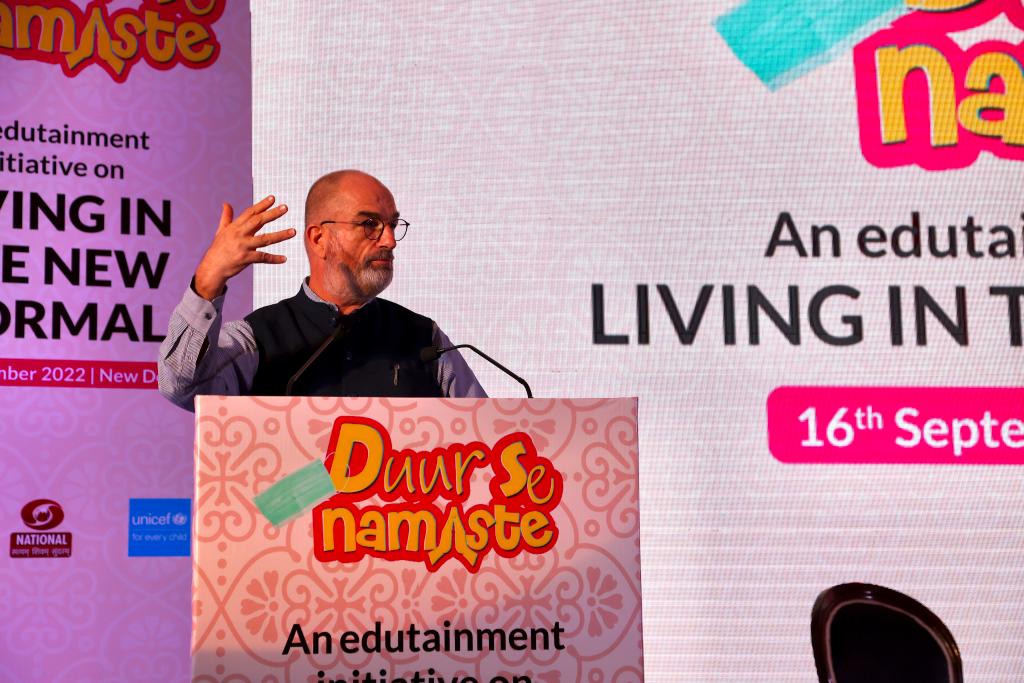 Duur Se Namaste, a fictional Hindi series developed in an entertainment-education format, highlights the challenges of a post-pandemic world and promotes the adoption of healthy behaviors and practices. Weaving messages on COVID-19 vaccine promotion and the need to continue COVID-19 appropriate behavior, the series includes tips for navigating mental health issues for children and young people and supporting children’s learning recovery as they return to school.

Sharing the vision on the edutainment series, Ms. Veena Reddy, Mission Director of USAID India, said, “COVID-19 knows no borders and no one is safe until everyone is safe. USAID is proud to support Duur Se Namaste, which highlights the challenges of life in the new normal, and ways to navigate these through good health practices.”

Highlighting the importance of using mass media for behavioral change, Mr Arjan de Wagt, UNICEF India Deputy Representative a.i, said, “We know from scientific studies in India how impactful television can be in catalysing effective behaviour change, and we have seen the power of visual communication during the pandemic. I am very pleased to join you for the launch of Duur Se Namaste, which is sure to provide not only excellent entertainment to a large audience, but also create a space to discuss important themes like supporting children as they are now back to school, psychosocial support for children of all ages, and mental health challenges among young people.”

Reiterating the commitment of Doordarshan, Mr. Mayank Agrawal, CEO, Prasar Bharati and DG, Doordarshan said, “Duur Se Namaste is a very relevant show in the present times and as India’s Public Service Broadcaster, it is our mandate to ensure that such shows reach the public. We are happy to have this partnership with UNICEF and look forward to continuing our work together for public welfare.”

A theatrical film on Duur Se Namaste was screened at the event, taking the audience through the main story, showing how the messages of vaccine promotion and COVID-19 Appropriate Behaviour (CAB) have been interwoven in the entertainment education series. The event also included a panel with the show’s lead actors Ankit Raizada, Dolly Chawla and Atul Parchure moderated by Manav Rath and Mannish Singh, from the creative team.

The edutainment series Duur Se Namaste has been on air on DD National at primetime slots since August 14, 2022. The show is broadcast every Sunday from 11 am to 12 noon, with repeat telecasts on Saturdays from 6-7 pm. The show is also available on Duur Se Namaste Youtube channel.

Ankit Raizada: Ankit is the main lead of Duur Se Namaste. A popular television actor, who has worked on shows like Jodha Akbar and Yeh Rishta Kya Kehlata Hai. Ankitt plays Vishu, a COVID hero in the series, who helps his neighbours with their challenges and problems and works as a volunteer for the elderly and infected during the peak of the pandemic.