GUWAHATI: The Kamrup Metropolitan District Administration has issued an order for the closure of all country spirit shops, IMFL retailers and bars in parts of Guwahati for the durga idol immersion process on Tuesday.

The official order issued by Deputy Commisioner Kamrup Metropolitan District on October 26 stated that,”In exercising power conferred under section 52(1) of Assam Excise Act, 2000, the undersigned hereby declares that all the retail IMFL ‘ON’/OFF/dub licenses and all the Country Spirit shops on AT. Road from Adabarl covering Maligaon-Pandu area (from Bharalumukh Police Station Point to laukhari covering Gotanagr area) of Kamrup Metropolitan District will remain closed on 27 October. 2020 for preservation of Public peace in view of immersion of “Maa Durga idol”. Any violation of the above will be viewed seriously.” 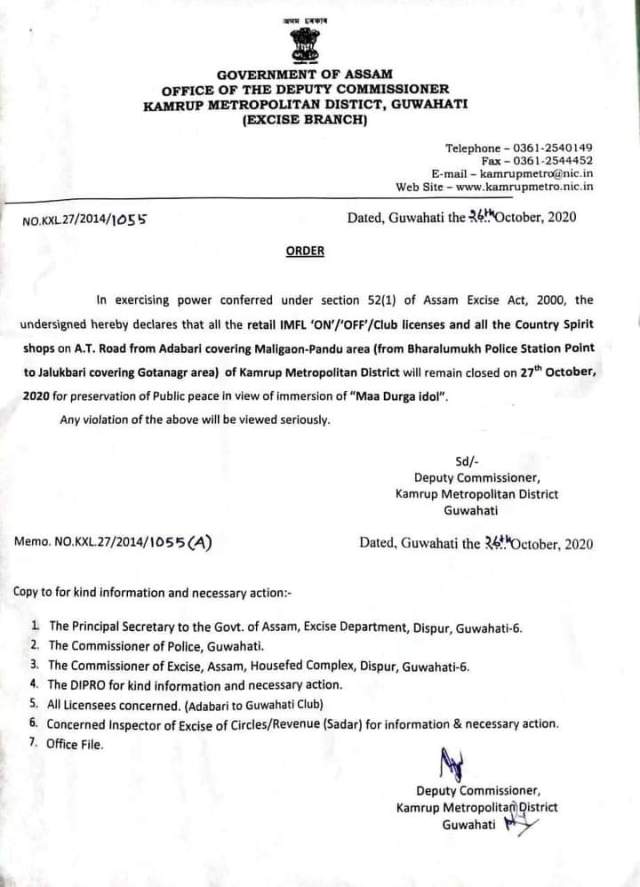 All the bars and wine shops in areas including A.T. Road from Adabari covering Maligaon-Pandu area (from Bharalumukh Police Station Point to Jalukbari covering Gotanagr area) in Guwahati will remain closed on today(Tuesday).