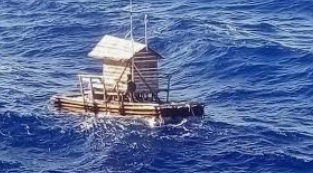 Aldi Novel Adilang, a 18 year old Indonesian boy was miraculously able to survive in the sea alone for long 49 days.He was a lamplighter on a wooden raft with a hut on top ,a tool which is used at night to atttract fishes in the sea .

According to sources, While fishing on his wooden raft, one day Aldi found himself in a nerve racking situation after severe sea winds displaced his rompong and broke the anchor roap of his fish trap.

However, Adil managed to survive for 49 days adrift the sea after his fish trap lost it’s moor. During these 49 days he ate sea fishes and water to sustain.

After 49 days of hard sailing amid the sea Adli was rescued by a Panamanian-flagged vessel off Guam around 1,200 miles away from the location he had set out for fishing .

Every time he saw a large ship he was hopeful, but more than 10 ships had sailed past him .But none of them knwingly or unknowingly stopped to save him. Adli shared this after his rescue from the sea on August 31st.