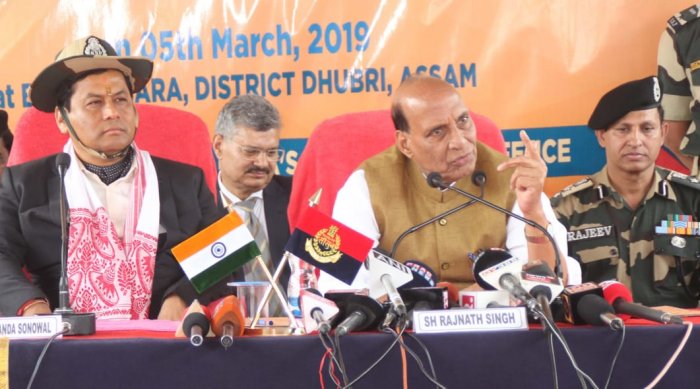 Ahead of the 2019 general elections, the Bharatiya Janata Party-led NDA government has decided to gift people of Assam a system to effectively check illegal immigration along the India Bangladesh border – an issue that BJP leaders have been raising during recent poll campaigns in the state.

“After successfully installing smart fences along 11 kilometers of Indo-Pak border in Jammu last year, we have now launched it in Assam. The system will help control cattle smuggling and cross-border infiltration. It was a long pending demand of Assam to seal Indo-Bangla border. It will take time for complete implementation of the project,” Singh said.

He termed it the best of systems to guard India’s international border, which will help reduce manpower and address the issue of patrolling-induced fatigue among Border Security Force (BSF) personnel.

“No other system can be better than this, and we want to implement it across the international borders in the country. This will help us do away with physical patrolling and fatigue. BSF personnel would now be deployed in strategic border outposts and the BSF control room called the Commandant Control Centre. In a few seconds, information would be relayed to the BSF Quick Response Teams,” said Singh.

A BSF official said that the 61 km border area in Dhubri district, from where river Brahmaputra enters Bangladesh, consists of vast char lands (sand bars) and a number of river channels that make border patrolling a difficult task, especially during monsoon.

The home minister stated that the NRC (National Register of Citizens) process would be completed well in time — by July 31, 2019. Assam chief minister Sarbanada Sonowal and BSF director general Rajni Kant Mishra accompanied Singh to Dhubri on Wednesday where he also addressed a public rally.