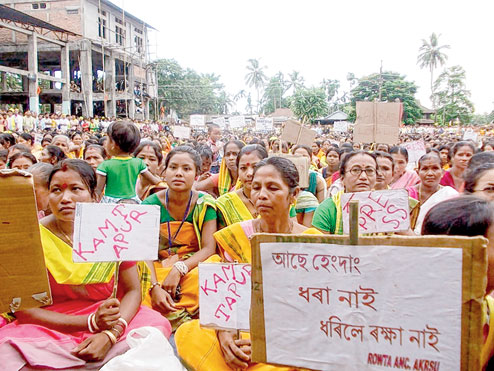 “The Koch-Rajbongshi community has been demanding full-fledged Scheduled Tribe status as is being enjoyed by other ST communities of the state. We will stick to our demand till it is met,” said Samiran Singha, adviser of All Koch-Rajbongshi Students’ Union (AKRSU) Atul Barman faction.

Singha observed as above during a huge congregation of people of the community on Sunday at Rowta Chariali in Udalguri district.

The AKRSU leader further said the diplomatic policy of the government in this regard is doubtful as it has been intentionally delayed as the Bill was not introduced in the recently-concluded session of the Rajya Sabha.

On the other hand, Atul Barman, president of the students’ organisation gave an ultimatum to the Union government saying that the AKRSU and other like-minded organisations of the state would not sit idle after January 31.

The Koch-Rajbongshi community would resort to democratic ways of protest in order to pressurise the government to meet their demand and hoped that the government would be serious over this long-pending issue and do the needful to resolve it by January 31 next.