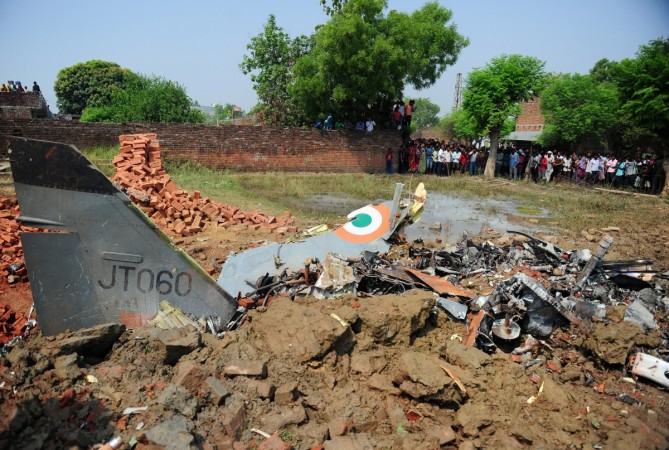 The pilot Rohit Katoch (36) ejected safely after steering his burning aircraft a few kilometres away from a rural residential area in Hatimpur locality. No casualty was reported.

The crash happened barely 15 minutes after it took off from Gorakhpur air base along with two other Jaguars for routine exercise.

An eyewitness said they saw the aircraft explode in flames in the sky before hitting the ground with a bang while the pilot landed in a sandy area close to the river bed.

“Two other such planes continued to hover in sky when the aircraft crashed. The strong winds intensified the flames of the burning plane and soon it was reduced to ashes,” said another eyewitness.

On being informed by locals, police and administration officials, including DM Kumar and senior superintendent of police (SSP) Rajeev Mishra, rushed to the accident site with rescue teams and fire tenders, while an air force chopper airlifted the injured pilot to Gorakhpur airbase where he was admitted for treatment of minor injuries on his back.

While the cause of the crash is not known, a court of inquiry has been ordered by Gorakhpur air force officials.

Speaking on phone, wing commander Prayagraj air force station, Arvind Sinha, said: “An inquiry has been ordered to look in to the reason of the mishap.”

The district magistrate said “the pilot showed courage and presence of mind by diverting the plane away from populated area towards the Chhoti Gandak river but it crashed midway in a field after catching fire. He saved his life by jumping off the plane when it was just about 150 metres from the crash site. He is fine and undergoing treatment at Gorakhpur air force hospital”.