“Maa, this is your Jintu from Kargil.

Are you all safe?

“I am all alone far far away;

My uniform so dear to me and the pair of boots

Have you taken care of them?

Maa, do not allow them to rot like the fallen leaves of winter.”

This is a translated poem of Priyadarshini Gogoi, a member of the Jasingfa Writers’ Association that observed the 21st Kargil Vijay Divas on Sunday by paying tributes at the memorial of late Captain Jintu Gogoi in Khumtai town of Assam’s Golaghat district. In the middle of the Covid-19 crisis, they conquered the challenge of remembering our war heroes and honouring them on this day. 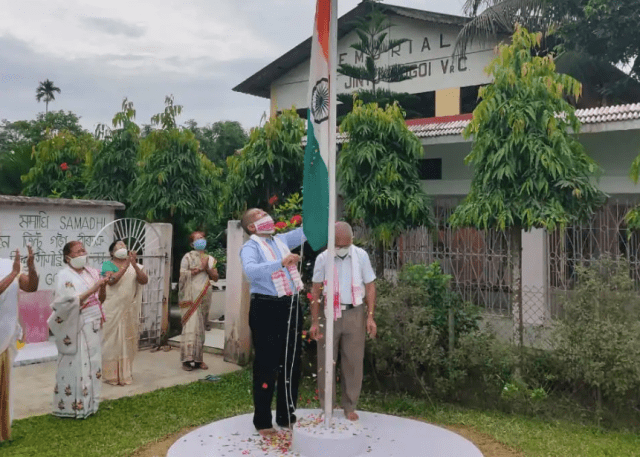 Maintaining social distancing, the small group of villagers from Na-Gaon along with Capt Jintu Gogoi’s parents gathered in a peaceful atmosphere to hoist the national flag and light the lamp in memory of soldiers who gave their everything to defend our country and never made it home.

“He is the pride of India, the pride of Assam, and we have paid tribute to all Kargil martyrs for their ultimate sacrifice. Every year, we observe three events — Capt Jintu Gogoi’s birth anniversary, his death anniversary and Vijay Divas. Unlike previous years when we would organise a big function, this time we are just about 10 people who have assembled here, adhering to social distancing norms. Coronavirus cannot stop us from honouring the braves,” said Lavanya Gogoi, the General Secretary of the writers’ unit.

On June 30, the group had observed Jintu Gogoi’s death anniversary by offering prayers and reciting the poem. Its words and thoughts left everyone in tears. Today, Capt Jintu Gogoi’s father, an Indian Air Force veteran, Honorary Flying Officer Thogiram Gogoi, recalled with pride the story of his son’s heroism — the courage he displayed while leading troops to evict the enemy from Kala Pathar in the Batalik sector. The 29-year-old soldier was posthumously awarded the Vir Chakra on August 15, 1999.

“We should remember this day well and with a lot of pride. My ‘beta’ answered the call of duty to protect and defend our great nation. He paid the ultimate sacrifice, but also helped his troops strategise and plan ahead. He could provide them all information regarding Kala Pathar,” said the retired Air Force personnel.

Captain Jintu Gogoi was commissioned into 17 Garhwal of the Garhwal Rifles, one of the most decorated regiments of Indian Army. In June 1999, the battalion deployed in the Batalik sub-sector was tasked with evicting the enemy from Kala Pathar in Jubar Heights, a ridgeline overlooking Jubar top, extending across the National Highway connecting Srinagar and Leh. The climb to the top was arduous and steep, but the young soldier did not give up. All companies were ‘daylighted’ except for Capt Gogoi’s platoon. The gallant ‘Bhullas’ took Kala Pathar in the face of heavy enemy fire, and then his unit encountered an overwhelming enemy force. Displaying his will to fight till death rather than surrendering unconditionally, Capt Jintu Gogoi launched an immediate attack killing two enemy soldiers in hand-to-hand combat, but was fatally wounded by enemy fire. The battalion launched fresh attacks in the subsequent days and took Kala Pathar. This paved the way for further successes — the battalion proceeded to take another dominating feature in the Muntho Dhalo complex, finally taking Point 5285 despite heavy snowfall and effective enemy fire.

“There was a wave of emotions associated with Kargil, and from Assam, he was the only Kargil martyr. When ‘Beta’ returned home wrapped in the tricolour, the streets were filled as people paid respects to their hero. We thought the feelings would always remain strong, in fact, it still is,” said Thogiram Gogoi, also narrating how his son would tell him how proud he was of the unit he served in and the brothers in uniform he served with.

“They were his second family… His coursemates still celebrate his Balidan Divas. They called me and conveyed their kind regards, some of them observe it where they are posted,” he added.

It was a career he ardently pursued since High School when he joined the National Cadet Corps (NCC), one that ended with Operation Vijay. Capt Jintu Gogoi has since been the inspiration for people of Assam, especially the younger generation.

“He was interested in joining the army since childhood. He was in the NCC and loved to do ‘Left Right Left’. He was so good, he attained Havildar rank in the NCC where he also learned a lot of discipline as a cadet. And the Army gave him a maturity level,” said Thogiram Gogoi, taking time to reminisce on his son’s growing up years.

“If you happen to visit Guwahati Railway station, notice a board on the right hand side of the entrance in Platform 1 – you will find the names of 18 gallantry award winners from Assam and you will see my Beta’s photo first in the list,” Gogoi told this correspondent.

In honour of the martyrs, several veterans recalled memories of Kargil war. Colonel Dilip Kumar Borah (retired) remains proud that he got a chance to serve, lead and return with life-changing memories from Kargil. At the time, he was the Commanding Officer of 16 GRENADIERS, a battalion comprising about 900 soldiers deployed in the icy heights of Drass in Jammu and Kashmir.

“I still remember Maj Vivek Gupta of 2 RAJ RIF. With partial success of 18 GRENADIERS to capture Tololing, Maj Vivek Gupta led the attack after few days. The capture of Tololing turned the tide of Kargil war in favour of India. 2 RAJ RIF captured Tololing but many including Vivek Gupta made the supreme sacrifice. The sight of his army doctor wife saluting his coffin in Delhi was one of the saddest scenes that I ever saw. He may not be here today, but his smiling face will always remain in my heart.”

According to official figures, 527 Indian soldiers died in Kargil war and 1,363 others wounded.