Lahowal: As polling is underway in Assam for the first phase of assembly elections, voters at the polling centre in Mankata area of Lahowal constituency are being provided masks, gloves and hand sanitisers amid the COVID-19 pandemic.

The temperature of voters is also being checked at a primary school – designated as a polling booth. 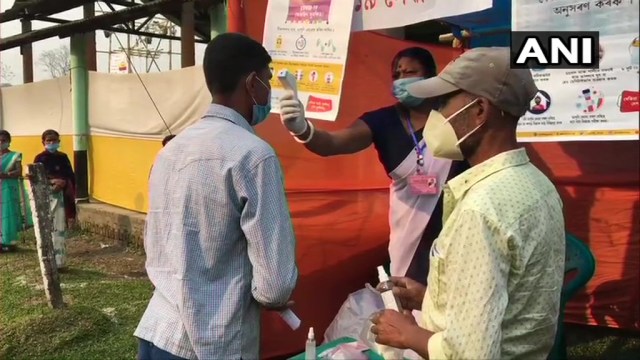 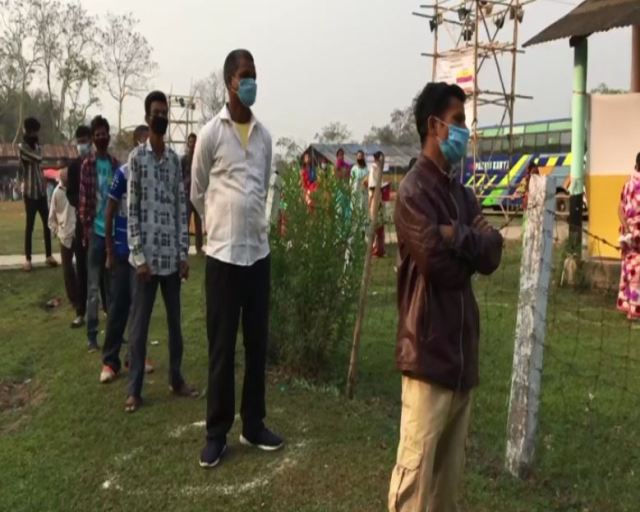 Binod Hazarika of the Bharatiya Janata Party (BJP), Manoj Dhanowar of Congress and Likhan Baruah of Assam Jatiya Parishad (AJP) are in the fray from Lahowal constituency.

Polling for the first phase of the elections began at 7 am on Saturday for 47 constituencies across 12 districts of the state.

A total of 264 candidates are in the fray for 47 seats — 42 seats from 11 districts of Upper Assam and northern Assam region and five seats from central Assam’s Nagaon district.

Out of these, 37 sitting MLAs are re-contesting including 24 from the Bharatiya Janata Party (BJP), six each from Congress and Asom Gana Parishad (AGP), and one from the All India United Democratic Front (AIUDF).

A total of 375 companies of security personnel including both central and state armed police forces like the Central Armed Police Force (CRPF) and State Armed Police (SAP) of other states have been deployed for the polls.

300 units will be active during the first phase.

Key candidates for this phase of polling include incumbent Chief Minister Sarbananda Sonowal in Majuli. Sonowal had wrested the seat from Congress’ Rajib Lochan Pegu in the 2016 assembly elections. Pegu, who had won the seat for three straight terms since 2001, has again been fielded by Congress.

The fate of ministers from NDA ally AGP — Atul Bora from Bokakhat and Keshab Mahanta from Kaliabor — will also be sealed.

Congress’ Ripun Bora is trying his luck from the Gohpur seat, where his wife Monika Bora lost in the 2016 polls. The 60-year-old leader will face sitting BJP MLA Utpal Bora.

For the three-phase assembly elections, there are 126 constituencies across 33,530 polling stations covering more than 2.33 crore electors in the state.

Polling for the next two phases will be held on April 1 and April 6. The counting of votes will take place on May 2. (ANI)