Assam, Mizoram CMs hold round of talks on border issue; say progress being made 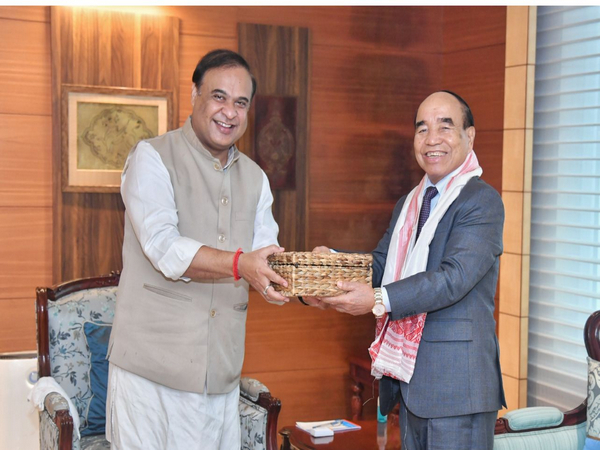 Assam Chief Minister Himanta Biswa Sarma met his Mizoram counterpart Zoramthanga to hold another round of talks on the long-pending Assam-Mizoram border issue in the national capital on Wednesday afternoon.
“Today my Mizoram counterpart Zoramthanga and I met to discuss the Assam and Mizoram border issue. A team of ministers from both states met in Aizawl recently. Today we discussed the progress and reviewed what happened in the meeting and we are satisfied with the progress. We are in the process of forming regional committees to solve this issue”, said Assam CM Himanta Biswa Sarma after the meeting.

The meeting between the two CMs lasted for around twenty-five minutes.
Mizoram CM Zoramthanga exclusively told ANI, “We have had a good round of meetings and are satisfied with the progress made at the meeting between the ministers of the two states. We’re hoping that we will be able to solve the issue at the earliest.”
When asked about the meeting with Union Home Minister Amit Shah, Zoramthanga said, “As of now we have had no talks of a meeting with the Union home Minister.”
In November last year, the two CMs met in the presence of the Union Home Minister in the national capital to discuss the decades-long pending issue.

In July last year, the border dispute turned violent, resulting in the death of seven personnel from the Assam police and injuring several others. Following this, a couple of rounds of meetings have taken place between the delegations from Assam and Mizoram to solve this issue amicably.
In 1972 Mizoram was made a union territory. However, the UT carved out of Assam was made a state in 1987. After initial acceptance of the border with Assam Mizoram gradually began disputing the border. (ANI)