Nagaon (Assam) [India], April 1 (ANI): Polling is underway in Assam for the second phase of assembly elections and COVID-19 safety protocols are being followed at various polling booths.
At a polling centre in Nagaon voters are being screened with a temperature gun when they arrive at the polling booths.
The voters are also being provided hand gloves and sanitisers. 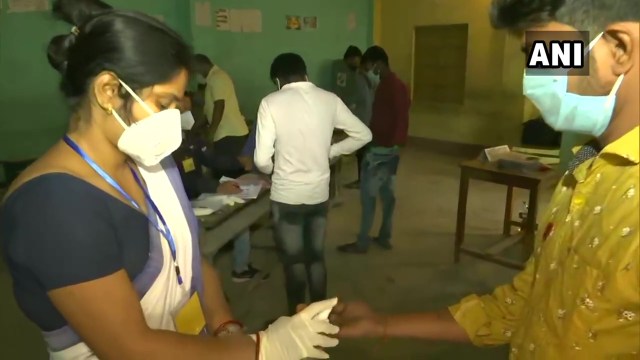 Bharatiya Janata Party (BJP) national president JP Nadda on Thursday appealed to the voters to exercise their right to vote in record numbers in the second phase of assembly elections and to follow COVID-19 norms.

“Today is the second round of voting for the Assam assembly elections. I request all voters to cast their vote and participate in this festival of democracy. During this, please wear masks while maintaining social distancing,” he said in a tweet.
Polling for the second and penultimate phase of Assam Assembly polls began at 7 am on Thursday to decide the fate of 345 candidates in 39 constituencies across 13 districts.
The main contest is seen to be between the alliances led by BJP and Congress.
The BJP-led alliance includes the Asom Gana Parishad (AGP) and United People’s Party Liberal (UPPL). Congress has stitched a broad alliance that includes All India United Democratic Front (AIUDF), Communist Party of India, the Communist Party of India (Marxist), the Communist Party of India (Marxist-Leninist) Liberation, the Anchalik Gana Marcha (AGM) and the Bodoland Peoples’ Front (BPF).
The election in the second phase includes 15 assembly seats in the Barak Valley. In the 2016 polls, BJP had bagged eight seats – six from Cachar district and two from bordering Karimganj district, which shares a boundary with Bangladesh.
Over 73.44 lakh voters are eligible to cast their votes in the second phase of the election. Of them, 37,34,537 are male voters and 36,09,959 are female voters, while 135 are third gender voters.
Voting will be held on 8,998 polling stations and 556 of them are all-women polling stations. (ANI)