Bhutan post-lockdown: A tour as worthy as Meditation 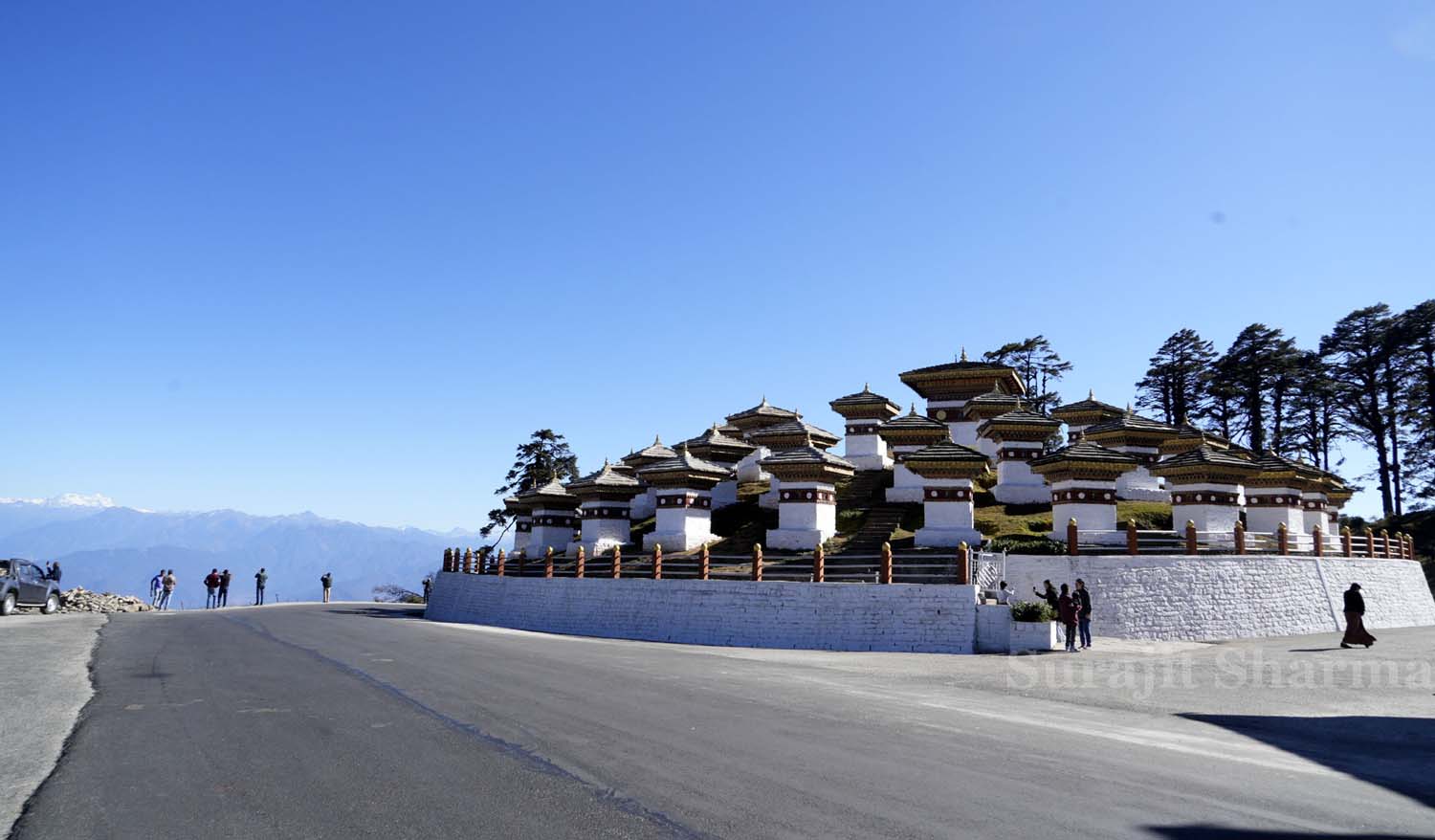 It was late December when an old associate called to ask if I would be part of a FAM (familiarisation) Trip to Bhutan.

Sounded interesting! Bhutan!! It was a sudden, unprepared trip for me. Dumping in loads of winter clothes (the internet said temperatures might drop to sub-zero at places) I reached the border for over a week-long stay.

As someone from the Northeast or to be precise from Guwahati, it was hard to believe that I was in a foreign country. The Himalayan kingdom has a similar terrain to the northeastern part of India, and the Bhutanese people would refer to me and the others in our group as regional visitors. It was simply impossible for them to fathom that Indians are from a different country, and the same was for us.

Just an immigration check gate in the middle of an otherwise joint market area separates Jaigaon (in West Bengal) from Phuentsholing (in the Chhukha district of Bhutan). But the ambience on both sides stands in stark contrast. Unlike the crowded, dusty mayhem of the Jaigaon market, Bhutan right from the border is immaculate.

Breathing in the icy Himalayan air:

Air knows no borders, pollution knows no borders either. At least that has been my belief till I stepped into Bhutan. It’s like even polluted air gets checked at immigration. Sounds mindless… but you have to visit to believe.

Step out of the immigration at Phuentsholing, and the fresh air reminds one of Bhutan’s carbon-negative status. The spick-and-span surrounding and the intricately painted buildings validate your foreign visit until your Bhutanese guide or driver (for taking a local guide is mandatory) speaks to you in Hindi; reminding that you are probably in not so a foreign land. Yes, from speaking in fluent Hindi and Nepali to shaking legs on Bollywood numbers to even discussing Hindi serials … would it be wrong to call the Bhutanese our own??

Phuentsholing is more of a night halt, to ‘acclimatize’ with Bhutan feel. But you might want to visit the small monastery or shop for mementoes (as it is cheaper in the border town). Indian notes go well across Bhutan.

My visit to Bhutan was as part of a FAM Trip organised by a Guwahati-based Destination Management Company (DMC), Lets See Tour and Travel Pvt. Ltd. 38 tour operators from several Indian states participated to familiarise with the new Tourism Policy of Bhutan. It was an 8-day tour covering four Dzongkhas (districts)- Chhukha, Thimphu, Paro and Punakha.

Being winter, vegetation across the Himalayan mountain terrain has dried down, with frosts covering most roadside foliage until late mornings. As we from the plains shiver, Bhutanese are eagerly waiting for the snow. A haven for apple and peach cultivation, the trees are now barren of their leaves… just the pines dotting the mountains as far as the eyes could see.

Houses are scarcely placed except in the capital city of Thimphu where it is relatively cluttered, but you could spot a Buddhist temple or monastery on top of a hill at almost every turn. Similar in architecture, with the Bhutan government mandating the same window design for every building- both private and government, but the complex bright artwork in all demands every attention. These hand-painted designs could be very intriguing.

But there is something about the fresh breath, the icy wind pricking the face through the open windows of the moving car, and the clean almost ‘no-traffic’ roads that engulf the visitor in a pristine feel.

The ears capture only the sound of the gushing wind or of the rivers accompanying most roads. Play your favourite tune, or more advisable is to try listening to a ‘zhungdra’ (Bhutanese folk music); that along with the ambience elevates one to the actual zen state of mind that most of us try achieving amid our chaotic lifestyle by merely listening to zen-tunes.

A delicious meal of the Bhutanese national dish Ema datshi (chilly cheese curry) with red sticky rice should keep you going for the day, though there are other local delicacies to choose from. Bhutanese love their rice and datshi (curry), both veg and non-veg. But their hospitable nature and love for Indians have taught them to cook roti and naan and other desi-curries. As a guide laughingly narrates, “It took us years to make the roti round, but we can’t keep our guests, most of whom are Indians, unhappy. So we mastered it.”

With a population of fewer than 8 lakhs a country that is more concerned about the Gross National Happiness index over GDP, travelling to Bhutan is itself a meditation. No unruly traffic, honking strictly an offence in town areas, one might as well sit by the roadside to take in the fresh air and find peace.

A Buddhist kingdom, most sites are associated with the Buddha- the monasteries, the temples, and the dzongs (fortresses). With revived tourism norms, the entry fee to many monuments has been hiked substantially- Rs. 1000 to Rs. 2000 per person; this is above the Sustainable Development Fee (SDF) of Rs. 1200 per person per night for Indians. But enter any monument- enter the majestic Punakha Dzong- “the palace of great happiness or bliss” and spend a few moments in front of the enormous Buddha inside the intricately curved temple interior, or leisure around in one of the historic courtyards where the coronation of the first king of Bhutan was held- it’s worth every penny spent. A visit to Paro would not be justified without touring the National Museum besides climbing the famous Tiger’s Nest (Paro Taktsang). While taking a 900-meter steep climb that takes about 2 hours to reach the latter site that harbours a sacred Buddhist site is on every traveller’s itinerary, the recently opened National Museum at the Paro Ta Dzong (originally a watchtower) must also be a mandatory addition. It is not just the displays inside, but the very feel of being inside a six-storied structure built in 1649 that must be experienced. For neither words nor photos can justify it.

These are just to name a few. The 8-day itinerary in Bhutan can be packed, and yet it may not be enough.

And when you have roamed enough, sit by the clear water of a chu (river in Bhutanese)- the Paro or the Pho Chu (father) and Mo Chu (mother) rivers at Punakha, or even amid the 108 memorial chortens (stupas) at the Dochu La (pass) staring at a range of snow covered Himalayan peaks, to bundle up the wonderful memories of the Himalayan kingdom.

Accompanying the associates in the FAM Trip was the Founder and Business Director of Lets See Tour and Travels Pvt. Ltd, Lohit Sharma. Bhutan allows hotels rated three stars and above for tourists, and as mentioned above it mandates that every tour group is accompanied by a local guide.

Amid such norms, confusion about SDF and more, it’s important and hassle-free to travel with the experts. Lets See, having been a DMC tinBhutan since 2010 got it all rolled up its sleeves. From the best hospitality in hotels and resorts to the most knowledgeable guides and troops of tourist vehicles, they promise to fulfil every traveller’s dream, valuing every bit of the hard-earned money.

And interactions with the Prime Minister of Bhutan Dr Lotay Tshering, DG Tourism Dorji Dhradhul, and a visit to the Indian Embassy in Bhutan during the FAM Trip ensured that every Indian visitor in the country will be welcomed as a guest and not just a tourist.