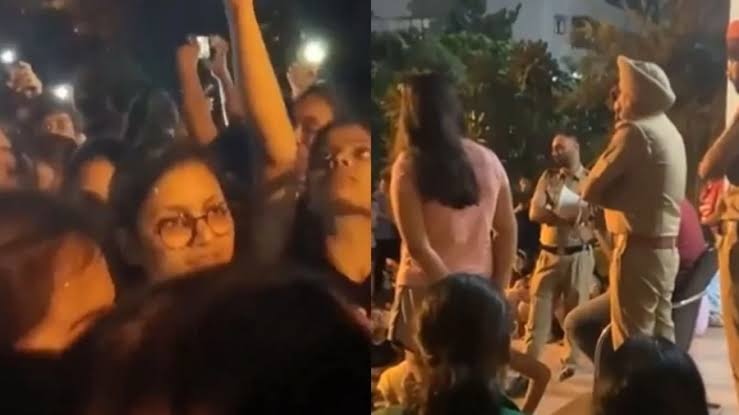 Tension prevails at the Chandigarh University campus, where massive protests were witnessed post-midnight after objectionable videos were leaked of reportedly around 60 girls taking baths in the campus hostel. Students protested on the campus and chanted ‘We Want Justice’ slogans.

According to police, the videos were recorded by a girl student, who has since been arrested. The videos were allegedly shared with some person(s) who reportedly uploaded them on adult platforms.

The girl student has been booked under Sections 354C of the Indian Penal Code and the IT Act. According to some reports, some students whose videos got leaked online attempted suicide on campus. However, the police and the state government denied any such incident. SSP Mohali Vivek Soni said there was no attempt to commit suicide. Rather, there were some girls who had fainted during the protests and ambulances were called in to shift them to the hospital

Punjab’s High Education Minister Gurmeet Singh Meet Hayer took to Twitter to say, “Sad to know about the unfortunate incident that happened in Chandigarh University. As this matter is very sensitive, I request all to refrain from forwarding unverified news. There is no news of any student suicide.”

“The government assures justice to university students, especially girls. Deputy Commissioner of Mohali and Senior Superintendent of Police have been ordered to conduct a thorough investigation into the entire incident. Whoever is found guilty in this case will not be spared,” he added.

Appealing for calm, Punjab School Education Minister Harjot Singh Bains took to Twitter. He said, ‘I humbly request all the students of Chandigarh University to remain calm. No one guilty will be spared. It is a very sensitive matter and relates to the dignity of our sisters & daughters. We all, including the media, should be very, very cautious. It is also the test of ours now as a society.’