New Delhi:  China has constructed a new village in Arunachal Pradesh, consisting of about 101 homes, show satellite images accessed exclusively by NDTV. The same images, dated November 1, 2020, have been analysed by several experts approached by NDTV, who confirmed that the construction, approximately 4.5 kms within Indian territory of the de facto border, will be of huge concern to India. Though this area is Indian territory, according to official government maps, it has been in effective Chinese control since 1959. However, earlier only a Chinese military post existed, but this time a full-fledged village that can house thousands has been built.

The village, located on the banks of the River Tsari Chu, lies in the Upper Subansiri district, an area which has been long disputed by India and China and has been marked by armed conflict.

It was constructed in the eastern range of the Himalayas even as Indian and Chinese soldiers confronted each other in their deadliest clash in decades, thousands of kilometres away in the Western Himalayas in Ladakh. In June last year, 20 Indian soldiers were killed in a clash in the Galwan Valley. China has never publicly stated how many casualties its own army suffered. The stand-off in Ladakh continues through this winter with thousands of soldiers from both sides deployed on the frontline at extreme altitudes in sub-zero temperatures.

The latest image that establishes the village in question is dated November 1, 2020. The image dated a little more than a year before that – August 26, 2019 – does not show any construction activity. So, the village was set up in the last year.

In response to NDTV’s detailed questions, the Foreign Ministry, which was also sent the satellite images, did not challenge what the pictures show. “We have seen recent reports on China undertaking construction work along the border areas with India. China has undertaken such infrastructure construction activity in the past several years.”

In October last year, China’s Foreign Ministry spokesperson said, “For some time, the Indian side has been ramping up infrastructure development along the border and stepping up military deployment that is the root cause for the tensions between the two sides.” There are, however, no signs of Indian road or infrastructure development in the immediate vicinity of the new Chinese village. 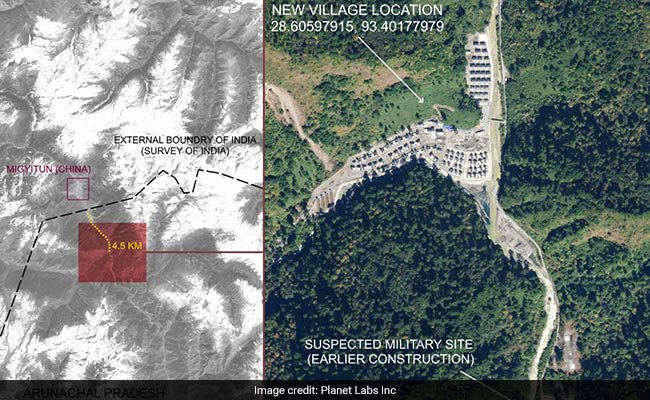 In fact, in November 2020, which is when this satellite image was taken, the BJP MP from Arunachal Pradesh, Tapir Gao, had warned the Lok Sabha of Chinese incursions in his state, referring specifically to the Upper Subansiri district. This morning, he told NDTV that this includes the construction of a new double-lane road. ”Construction is still going on. China has entered more than 60-70 kms inside the upper Subansiri district if you follow the path along the river. They are constructing a road along the river known locally as the Lensi as it flows in the direction of the Subansiri river.”

The Foreign Ministry did not respond directly to a question on whether the village construction has been diplomatically raised with Beijing. It said to NDTV, ”The government keeps a constant watch on all developments having a bearing on India’s security and takes all the necessary measures to safeguard its sovereignty and territorial integrity.”

An authentic online map of the Surveyor General of India, used by the government as its official map, clearly shows that the Chinese village lies well within Indian territory. 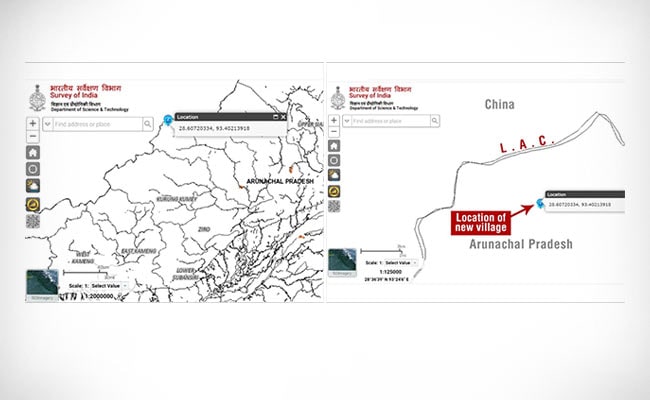 The images with NDTV have been procured from Planet Labs Inc, satellite imagery experts who monitor the planet on a daily basis. They show the exact coordinates of the new village, which lies north of a large square-shaped structure, believed by defence analysts to be a Chinese military post, first captured as an image over a decade ago by Google Earth. The new images with NDTV indicate that this post has also been substantially upgraded. 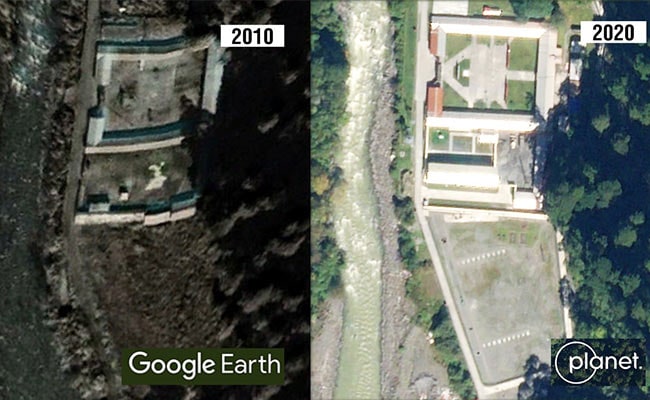 New Chinese village lies 1 km north of an existing Chinese military post, which has been upgraded over the last decade. Click here for high resolution image

Google Earth images also indicate that the village lies south of the McMahon Line, the demarcation between Tibet and India’s Northeast which New Delhi believes marks the boundary between India and China in the region. This line is disputed by Beijing.

According to Claude Arpi, an expert in India-China relations, ”The village is well South of the McMahon [Line] and the Indian perception of the Line of Actual Control.” While explaining that this has historically been a disputed area, the construction of the new village, he says, ”is an extraordinarily serious issue as it has many other implications elsewhere on the boundary.”

Construction of this village appears to be a violation of a key part of multiple agreements reached with India that ask both countries to “safeguard due interests of their settled populations in the border areas” and decree that ”Pending an ultimate settlement of the boundary question, the two sides should strictly respect and observe the line of actual control and work together to maintain peace and tranquility in the border areas.”

”The imagery is clearly showing the Chinese construction of a residential area within India’s claimed border,” says Sim Tack, a leading military analyst on armed conflicts. ”It’s important to note that the Chinese military has maintained a small forward position in this valley since 2000” says Mr Tack. This position ”has allowed China to advance observation into the valley for many years, [and] has been seemingly uncontested.” This has ”allowed gradual upgrades of mobility from China into the valley (roads and bridges) over time, eventually culminating in the recent construction of this village.”

The Tsari Chu river valley has a history of clashes between India and China dating back to 1959. A formal note of protest sent by Delhi to Beijing at the time says Chinese soldiers fired without notice on an Indian forward post “which was twelve strong but eight Indian personnel somehow managed to escape.”

”China is opening another front against India by taking its “salami-slicing” tactics to Arunachal Pradesh,” says strategic affairs expert Dr Brahma Chellaney. ”Its encroachment on an area that clearly falls within India underscores the stealth and speed with which it is redrawing facts on the ground, with little regard for the geopolitical fallout.”