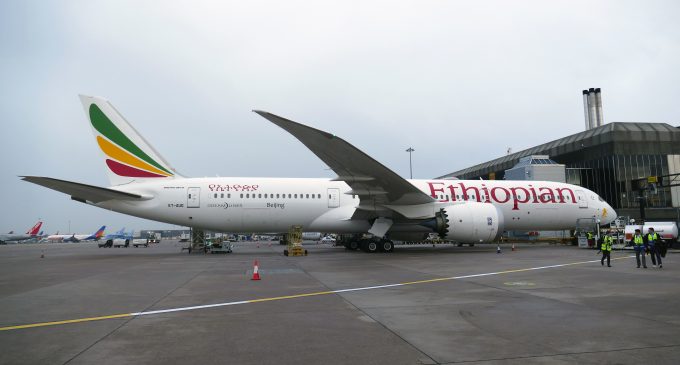 An Ethiopian Airlines flight with 157 people thought to be on board crashed shortly after takeoff Sunday morning from Ethiopia’s capital headed to Nairobi, the airline said.

The airline’s statement said 149 passengers and eight crew members were thought to be on board the Boeing 737 that crashed six minutes after takeoff from Addis Ababa, on its way to Kenya’s capital.

The crash occurred around Bishoftu, or Debre Zeit, some 50 kilometers (31 miles) south of the capital, shortly after taking off at 8:38 a.m. local time, said the airline’s statement.

While the airline said that “search and rescue operations are in progress and we have no confirmed information about survivors or any possible casualties,” a separate statement by the Ethiopian prime minister’s office offered its “deepest condolences” to families.

There were no immediate details on what caused the crash.

The state-owned Ethiopian Airlines calls itself Africa’s largest carrier and has ambitions of becoming the gateway to the continent. The crash comes as the country’s reformist prime minister, Abiy Ahmed, has vowed to open up the airline and other sectors to foreign investment in a major transformation of the state-centered economy.

The Ethiopian prime minister’s official Twitter account, expressed condolences to families of those lost in an Ethiopian airline’s flight to Nairobi, without giving details.

“The office of the PM, on behalf of government and people of Ethiopia, would like to express it’s deepest condolences to the families that have lost their loved ones on Ethiopian Airlines Boeing 737 on regular scheduled flight to Nairobi, Kenya this morning,” the PM’s office said on Twitter.