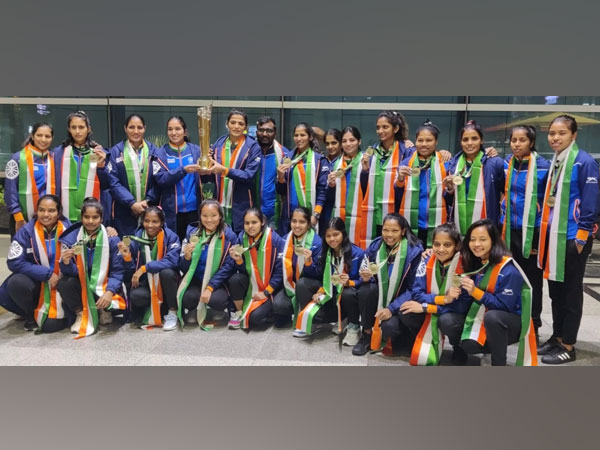 Having won the inaugural edition of the FIH Women’s Nations Cup 2022 in Valencia in grand style, the Indian Women’s Hockey Team arrived in New Delhi on Monday morning, and were greeted with rapturous applause.

The title for the Indian Women’s Hockey Team means that they have also secured promotion to the 2023-24 FIH Hockey Women’s Pro League.
“As a Captain, I am very proud and delighted with my teammates. Everyone gave their 100 per cent during the FIH Women’s Nations Cup 2022, and we maintained our focus right from the start, on and off the field, and it really feels great to be part of such a team,” Captain Savita Punia said as quoted by a press release from Hockey India.
Savita also added that the Indian Women’s Hockey Team are not taking their foot off the pedal, and has its eyes on the next year’s calendar.

“We have had a good year in 2022 and going forward we will continue to aim for more wins and titles. We have the Asian Games 2022 coming up next year, and we will definitely try to come back with a good result,” Savita said.
India defeated Spain in the Final of the FIH Women’s Nations Cup 2022, with Gurjit Kaur scoring the only goal in a keenly contested match on Saturday.

“Winning the Final at the FIH Women’s Nations Cup 2022 has to count as the best moment for me and the team. We had this as our goal from the beginning and to be able to achieve it felt really good,” said Gurjit Kaur.
The tournament in Valencia also saw the dynamic forward Lalremsiami cross the 100-cap mark for the Indian Women’s Hockey Team.
“To be able to reach the 100-cap mark at such a young age is something that gives me immense joy. And I am very grateful for the continued support from everyone on the team. We are very happy to have won the FIH Women’s Nations Cup 2022, and we will continue to work hard going ahead,” Lalremsiami said. (ANI)