First body pulled out of Meghalaya mine, 42 days after 15 workers got stuck 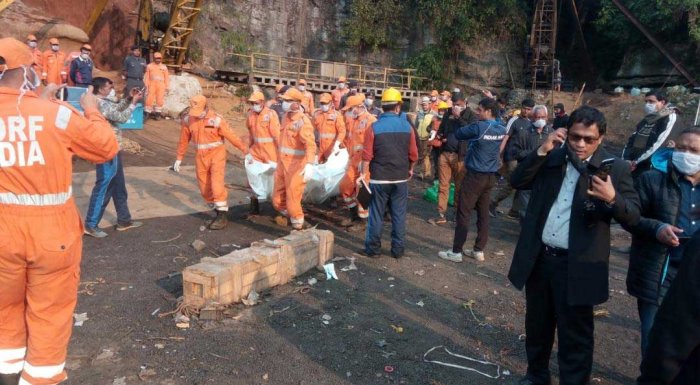 Rescuers on Thursday managed to pull out the remains of the lone body that they had managed to locate in the flooded Meghalaya coal mine in East Jaintia Hills district. On Tuesday, the body had slipped from the grip of the Indian Navy’s underwater remotely operated vehicle (ROV). The body was found late on Wednesday evening.

The body was pulled out in a joint operation by the NDRF and Indian Navy.

It took six men – 2 from the NDRF, 3 navy men and one civil hospital staffer – to pull out the body from the flooded mine. The rescuers went into the shaft in two teams with an inflatable boat, a body bag and other NDRF equipment.

The body was finally packed and pulled out from a depth of 170 feet in the 355-foot deep main shaft of the mine. The body was handed over to the officer in charge PS Saipung in the presence of civil administration. The retrieved body has been sent to the Civil Hospital Khliehriat for post-mortem.

A police official said that the recovered body is largely intact.

“The body is largely intact but the face is slightly disfigured. It has been kept in cold storage for now and the families of all suspected missing persons have been informed and called,” he said. While three families are locals, the other families are from distant places in Assam and are likely to reach the place either tomorrow or on Saturday.

An official involved in the rescue, who did not want to be named, said the body was relocated late in the evening on Wednesday. Another official familiar with development also confirmed that the body “has been relocated and in the process to pull it out continues.”

The body disengaged from the ROV after it was pulled from the rat hole to the main shaft of the mine on Tuesday.

“The Indian Navy today (Wednesday) resumed their work with the ROV inside the main shaft to locate the remains that slipped from the jaw of ROV yesterday (Tuesday) while trying to pull it upwards,” R Susngi, the spokesperson of the East Jaintia Hills district administration, said earlier on Wednesday as the navy ROV searched for the body.

At least 15 miners were trapped in the illegal rat-hole mine in Khloo Ryngksan of East Jaintia Hills district, when it was flooded on December 13.

“Due to the presence of pipes, cables, debris, their efforts to locate have not been successful,” Susngi said elaborating the difficulties in tracing the body.

Officials involved in the rescue operation said they believed the body would float in the water in the main shaft. Instead, it went to the bottom.

The main shaft has around 170 feet of water which has not receded despite attempts to pump it out.

The body which was spotted by the ROV in one of the rat holes on January 16, was in a highly decomposed state and authorities had sought the help of family members of the missing miners to identify the victim. Parts of the body started disintegrating as the ROV tried to pull it out, officials had said earlier.

The Meghalaya government informed the Supreme Court on Monday that the operations at the rat-hole coal mine to look for survivors will continue. It also indicated that the workers trapped in the mine for more than a month may have died.