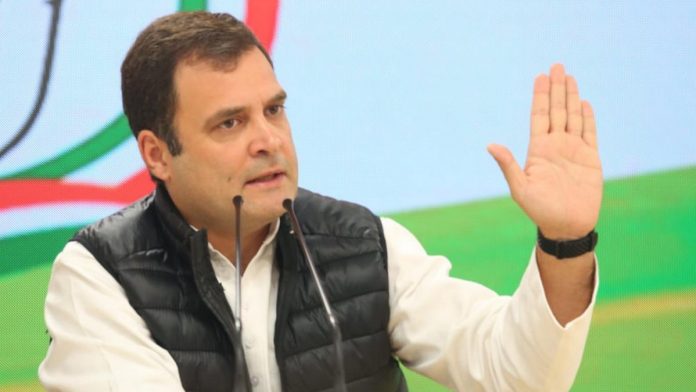 Congress president Rahul Gandhi on Thursday stepped up the campaign against Prime Minister Narendra Modi over the Rafale deal, demanding that the government probe him too. “Why can’t there be a criminal investigation against him also,” Gandhi said, pointing to the Centre’s decision to probe the leak of official documents from the defence ministry.

The Congress president’s fresh attack comes a day after the government’s top law officer told the Supreme Court that the documents cited by lawyer Prashant Bhushan were ‘stolen’. The top court was hearing requests to review its December verdict that rejected the demand for a probe into the deal to purchase Rafale fighter jets from French aviation firm Dassault Aviation.

One document is an eight-page dissent note written by three domain experts in the Indian negotiating team. In another, a top defence ministry official complained about the PMO conducting “parallel parleys” with the French authorities in the controversial Rafale deal which, Rahul Gandhi cited, to accuse the PMO of influencing the deal. “PM Modi performed bypass surgery in Rafale deal,” he said.

Attorney General KK Venugopal also told the three-judge bench that the government could invoke the Official Secrets Act against The Hindu newspaper, which had published the papers.

“Yes of course take action on those involved in this missing documents case but also initiate an inquiry on PMO making parallel negotiations,” Gandhi said at a media conference in the national capital. Sharpening his attack moments later, he asked: “Why doesn’t the PM get a probe ordered if he isn’t guilty”.

The ruling BJP-led national coalition has rejected the Congress campaign against the prime minister over the deal to buy 36 fighter jets on several elections. In the court yesterday, the Centre also told the judges that defence deals could not be judicially examined. Outside, the BJP often accuses the Congress of acting at the behest of vested interests that the government says, would hurt national security.

At Thursday’s press conference, Rahul Gandhi kept his focus on the government’s line that some Rafale papers had been stolen before he broadened his attack.

“Gayab ho gaya (It has vanished) is the government’s new tagline,” Rahul Gandhi said at the start of his briefing.

“First”, he said, “it was the 2 crore jobs for youth that vanished. Then the promised right price to farmers for their crops, then the promised 15 lakh to be deposited in bank accounts…Now, Rafale file has disappeared,“ he went on before accusing the government of trying to evade an investigation.

The Rafale deal has become controversial with the Opposition, led by the Congress, claiming that the price at which India is buying Rafale aircraft now is ₹1,670 crore for each, three times the ₹526 crore, the initial bid by the company when the UPA was trying to buy the aircraft. It has also claimed the previous deal included a technology transfer agreement with HAL.

The NDA has not disclosed details of the price, but the UPA deal, struck in 2012, was not a viable one, former defence minister Manohar Parrikar has previously said, implying that it would have never been closed and that, therefore, any comparison is moot. Indeed, the UPA was not able to close the deal until 2014, largely over discussions related to pricing of items not included in the initial bid.

The deal has also become controversial on account of the fact that one of the offset deals signed by Dassault is with the Reliance Group of Anil Ambani. The Congress claims the earlier deal was scrapped and a new one signed just to provide Ambani this opportunity for an offset deal. Both the government and Reliance have repeatedly denied this.