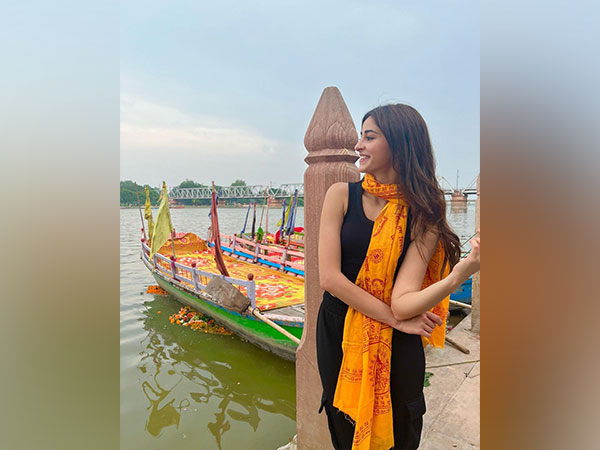 Bollywood actor Ananya Panday, on Thursday, shared a string of pictures from Lord Krishna’s birthplace Mathura.
Taking to Instagram, the ‘Khaali Peeli’ actor shared a post and captioned it in Hindi, “Radhe Radhe.”

In the pictures, Ananya could be seen posing in front of the Ganga ghat and a historical building.
Ananya could be seen in an all-black look as she donned a black cut-sleeve top paired up with matching track pants and a saffron cloth around her neck.

As per reports, Ananya has been paired up with actor Ayushmann Khurrana and Raaj Shaandilyaa’s next ‘Dream Girl 2’ and the duo has already started shooting for the project.
Ayushmann recently dropped a fun reel on Instagram in which he could be seen with Ananya and his ‘Dream Girl’ co-actors Abhishek Banerjee and Manjot Singh.

Released in the year 2019, ‘Dream Girl’ was declared a blockbuster hit which revolves around a male actor who plays female roles in local drama, and the situation turns dramatic after the man, Ayushmann, takes up a job at a “hotline” and the men start liking the voice.

‘Dream Girl’ was shot in Mathura, and the latest post of Ananya has now sparked speculations that the actor is currently shooting for the sequel in U.P.
The official announcement of the film and the star cast is still awaited.

Meanwhile, the 23-year-old actor was recently seen in a Pan-India film ‘Liger’ alongside south actor Vijay Deverakonda which failed to impress the audience at the box office.
She will be next seen in Excel Entertainment’s next ‘Kho Gaye Hum Kahan’ along with Siddhant Chaturvedi and Adarsh Gourav. (ANI)