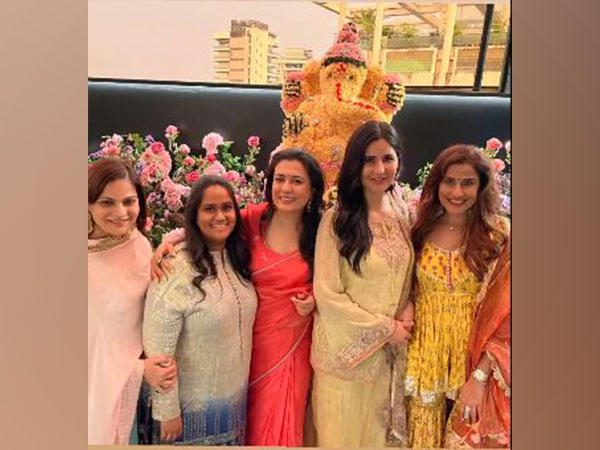 Bollywood actor Katrina Kaif, on Wednesday, attended the Ganesh Chaturthi Aarti at Salman Khan’s sister Arpita Khan Sharma’s residence in Mumbai.
A picture from the Ganpati celebration is currently being circulated on social media in which the ‘Dhoom:3’ actor could be seen posing with Aript and her friends. 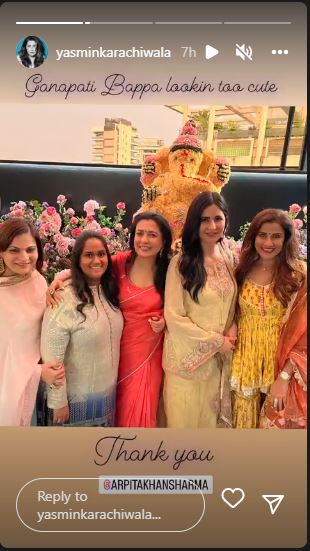 In the picture, Katrina could be seen posing with Arpita, Alvira Khan, Yasmin and director Kabir Khan’s wife Mini Mathur in ethnic attires.

The ‘Ek Tha Tiger’ actor was seen arriving at Arpita’s residence along with her husband Vicky Kaushal.
Apart from them Salman Khan, Sohail, Arbaaz, Alvira and their mother Salma Khan were also present there to seek Lord Ganesha’s blessings.

According to the Hindu calendar, Ganesh Chaturthi is celebrated on Chaturthi Tithi of Shukla Paksha in the month of Bhadrapada. Although the festival is celebrated across India, it is extremely prominent in Karnataka, Maharashtra, and Gujarat.
Meanwhile, talking about the work front, Katrina will be next seen in an upcoming horror comedy film ‘Phone Bhoot’ alongside Siddhant Chaturvedi and Ishaan Khatter, which is all set to hit the theatres on November 4, 2022.

Apart from that, she is also a part of ‘Merry Christmas’ along with south actor Vijay Sethupathi, and ‘Tiger 3’ with Salman Khan, which is slated to release on April 23, 2023. (ANI)