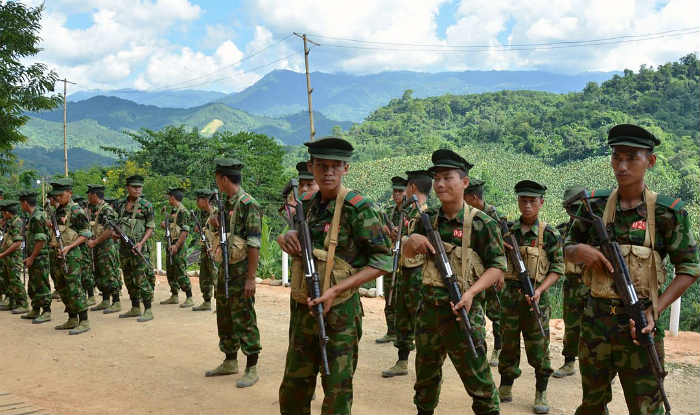 After repeated persuasion by India, the Myanmar government has finally started acting tough on militant groups using the territory of the neighbouring country as safe sanctuary and a permanent camp of the Myanmar army has been set up in the Taga area, where the militants have their bases. The Myanmar government has also turned down a request by a number of militant groups to allow them to set up designated camps within the territory of that country.
Highly placed sources in the Ministry of Home Affairs (MHA) told The Assam Tribune that though no mass exodus of militants from their Myanmar bases to India has yet been noticed after the neighbouring country started acting tough against them, the forces have been alerted to keep a close watch on the routes known to be used by militants to sneak into India from their bases in the neighbouring country.
Sources revealed that for quite some time, the Government of India has been requesting Myanmar to take action against the militants camping in that country as it is vital for overall improvement of law and order situation in the northeastern region. But the Myanmar government did not have strong presence in the areas, particularly in the Taga area where most of the camps of militant outfits are located. However, the Myanmar army recently set up a permanent base in Taga and asked the militants to vacate their camps. The Government of Myanmar has made it clear that it would not allow any militant group of Indian origin to use the territory of that country any more and on the face of the tough action, the militants have been forced to shift their bases frequently.

Sources said according to inputs available, the Myanmar government has been putting pressure on the NSCN(K) to sign a formal ceasefire agreement and not to allow members of other militant groups to use the facilities of the outfit. Most of the militant groups of the Northeast, including Manipur-based outfits and United Liberation Front of Asom (Independent) are using the bases of NSCN(K) in Myanmar and the government of that country made it clear that this would not be allowed any more. According to information available with security agencies, some militant groups such as the ULFA(I) and a few Manipur-based groups had requested the Myanmar government to allow them to set up designated camps in their territory, but the request was turned down.

The Myanmar army has seized hundreds of weapons belonging to the militant groups and their personnel have started scanning the area to locate the shelter points of the militants. If the NSCN(K) is forced to sign the ceasefire agreement like some other outfits of Myanmar have already done, it will be difficult for the Naga rebel outfit to provide shelter to members of other militant groups, sources pointed out and said that under the present circumstances, it would not be possible for the ultras to survive in Myanmar without the help of the NSCN(K).