GUWAHATI: Well, here’s a camera trick we’ve not seen in a smartphone before: X-ray vision. Or, at least, something that looks very much like it. It’s a feature of the new OnePlus 8 Pro, which seems to use the phone’s infrared sensors to see through a small subset of black materials.

If you’ve got a OnePlus 8 Pro and want to try it out for yourself, just open up the camera app, swipe over to the “Photochrom” color filter, and point it some black objects.

Fair warning: we experimented with the filter ourselves and it really is quite selective. It only works on very thin black plastic that’s already a little see-through in the right light. Think things like TV remotes rather than the sturdier plastic of a high-end DSLR. It’s also hit or miss with clothing.

We first saw this trick via Ben Geskin on Twitter (above) but lots of people have since demonstrated it. There’s a great video from Unbox Therapy (below) which shows the filter in action, looking through an Apple TV box, a Switch remote, and even a thin black T-Shirt.
But how does it work? We reached out to OnePlus to see what they know, but the company declined to comment. However, it seems the process relies on the phone’s infrared sensors, which collect a type of radiation that’s invisible to the human eye.

Infrared sits right above visible light in the electromagnetic spectrum, and is sometimes referred to as “heat radiation,” because that’s how we feel its effects. The world is saturated in infrared, but because we don’t see it, we don’t usually think about it. About half of the energy that arrives on the Earth from the Sun arrives as infrared, for example.

Special types of equipment can capture infrared radiation, including night vision goggles and thermal cameras. This allows you to see through certain materials, as infrared passes through them in a way visible light (which is all our eyes perceive) cannot. Firefighters, for example, use infrared cameras to see through smoke into burning buildings.

As high-end phones start incorporating infrared sensors too, it seems they can be used for this same purpose. And it’s not just the OnePlus 8 Pro that can do it. The TrueDepth camera on recent iPhones, which use infrared light to scan your face for FaceID, can also be hijacked to create see-through images, as app developer Guilherme Rambo has demonstrated (though it seems you need a jailbroken iPhone to do this). 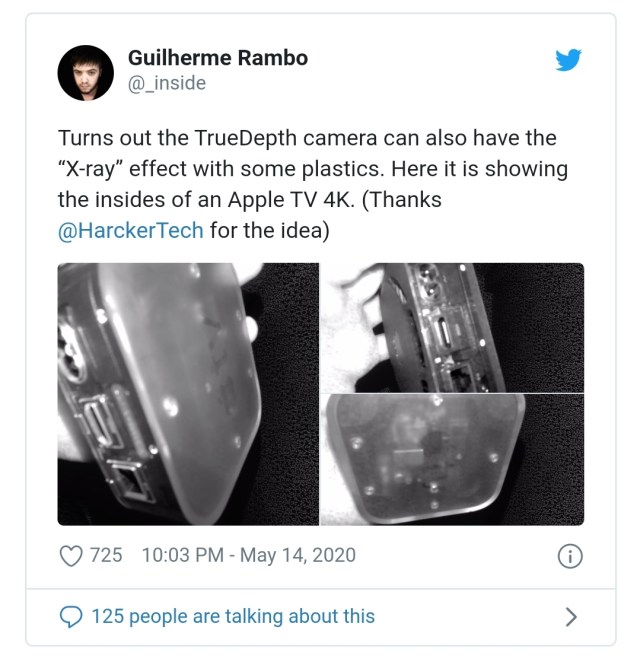 Depending on the severity of the problem, OnePlus might have to restrict the feature through a software update. After all, there was a similar scandal in the 1990s when Sony was forced to recall a camcorder that included a night vision feature that could also be used to see through clothing.

Until then, enjoy looking inside your TV remote. If you have an 8 Pro and have experimented with the feature, drop some pictures below. We’ll update this story if and when we hear back from OnePlus.

Apple Watch Series 7 up for pre-orders