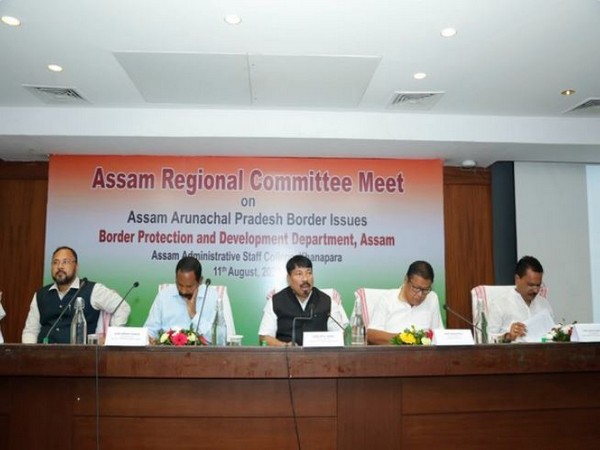 With an aim to resolve the long-standing border issue along the Assam-Arunachal Pradesh, a joint team of the Regional Committees of both the neighbouring states visited Ran Ging Kan village in Changlang district of Arunachal Pradesh, said the officials on Saturday.

The Regional Committee jointly visited the area for the first time after the Namsai Declaration was signed by Assam Chief Minister Himanta Biswa Sharma and his Arunachal Pradesh counterpart Pema Khandu a few weeks ago.
Addressing the gathering, Assam Agriculture Minister Atul Bora said that the state government has decided to solve the border dispute with proper dialogue between the two states.

“Discussions with the representatives of the people are most crucial in achieving a peaceful consensus. The two states have always maintained brotherhood and harmony and that cannot be compromised under any condition,” said Bora.
The Tinsukia district shares a long boundary with Arunachal Pradesh and there are 36 villages under Margherita Sub-Division that are along the Assam-Arunachal Border and around 6 villages are disputed areas at present.
Arunachal Pradesh Minister Kamlung Mossang also applauded the ground visit of the Assam government team.

The representatives of the bordering villages also voiced their problems in the meeting and later, the Regional Committee held a meeting with the members to prepare the road map for further course of action.
The meeting was attended by Tesam Pongte, Deputy Speaker of Arunachal Pradesh assembly, Bhaskar Sharma, Margherita LAC MLA, Phoshum Khimhun and Laisam Simai, MLAs of Arunachal Pradesh, Anant Lal Gyani, Guardian Secretary, Tinsukia, Narsing Pawar, DC of Tinsukia, Arjun Mohan i/c, DC of Changlang and other officials from Tinsukia, Margherita and Changlang. (ANI)