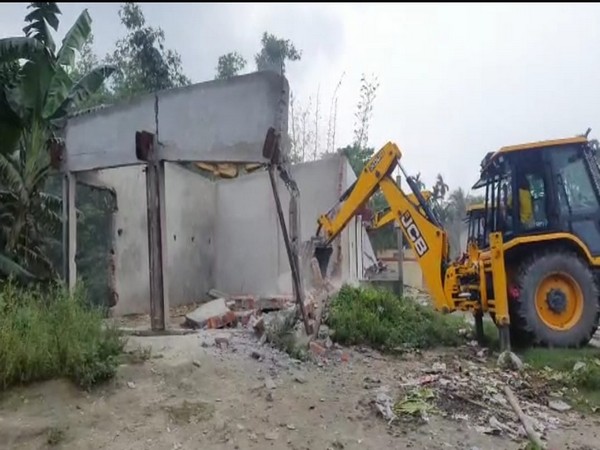 The Assam government on Saturday carried out a massive eviction drive in the state’s Sonitpur to clear encroachment from 1,000 bighas of land.

The eviction at Chitalmari Char area under Barchalla assembly constituency came after the demolition of three madrassas in the state.
The eviction drive is underway since morning in the presence of heavy secuity being deployed in the area.
The Sonitpur administration has used several excavators in the drive .
As per the information, around 70 per cent of the people who had illegaly encroached the land had left after they were served with the eviction notice.
“The people who encroached the land have extended their cooperation to the administration. We hope that the public will extend their cooperation in next phase also. We also request the encroachers to leave the place,” PK Bhuyan, IGP of Northern Range, Assam said.

The top cop further added that around 1,500 security personnel have been deployed.
On Wednesday, the authorities had demolished third madrassas, namely Markazul Ma-Arif Quariayana at Kabaitary Part-IV village under Jogighopa police station in Bongaigaon district after the allegations that its premises were used for terror activities.
Several bulldozers were seen conducting the demolition of the Markazul MaArif Quariayana Madrassa located at Kabaitary Part-IV village, which falls under Jogighopa Police Station. The Bongaigaon district administration deployed security personnel in force in the area.
This third madrasa was razed soon after the arrest of 37 persons including the Imam and madrassa teachers on the charges of being linked to terror outfits Al Qaeda in Indian Subcontinent (AQIS) and Ansarullah Bangla Team (ABT).
This madrassa was demolished soon after the Goalpara District police conducted a search operation on August 29 and seized several key documents including one leaflet of Ansarullah Bangla Team (ABT) in Bengali language and one logo suspected to be of AQIS.

On the matter, Assam Chief Minister Himanta Biswa Sarma had said that some madrasa managements were not running the institution but were running a terrorist hub.
“This is the second madrassa we evicted as they were not running as an institution but were running as a terrorist hub. I don’t want to generalise, but we investigate and take appropriate action when a complaint of fundamentalism comes,” Sarma had said.
Sarma had said in a press conference that six Bangladeshi nationals who are the members of Ansarullah Bangla Team (ABT) / Al-Qaeda Indian Subcontinent (AQIS), entered Assam in 2016-17 and Assam Police had arrested one among them while five others are still absconding.

Prior to this on August 4, the Assam administration had demolished Jamiul Huda Madrasa at the Moirabari area in the Morigaon district.
The Jamiul Huda Madrasa was run by an active member of Bangladesh-based terror outfit Ansarullah Bangla Team (ABT), Mustafa alias Mufti Mustafa, who was a resident of Saharia Gaon in Morigaon and an important financial conduit of the ABT.
Assam currently does not have any government-run madrassas as they have recently been converted into regular schools, while individual or privately-run madrassas continue to exist.

However, reacting to the demolition of three madrassas by the Assam government for its alleged involvement in anti-national activities, Assam Congress on Friday accused that it was a hidden plan of Badruddin Ajmal-led All India United Democratic Front (AIUDF) and ruling BJP to do polarizing politics ahead of 2024 general election.
Congress MLA Abdur Rashid Mandal alleged that by targeting madrassas, BJP has tried to give an opportunity to AIUDF to go to the Muslim people to do polarizing politics so that BJP can get benefits.
The Congress MLA had told ANI that the Congress party has condemned the Assam government’s activities against Muslims and Madrasas.
Mandal had said, “we are totally against Jihadis and terrorism but the state government’s act of demolishing Madrassas is totally condemnable and we are strongly opposing it. If the government found any Jihadi or terrorist, they can arrest them, take strong action against them, but demolishing Madrassas is a violation of the constitution.”

Hitting out at the BJP and RSS, Abdur Rashid Mandal said that the BJP and RSS were trying to finish Islam in the country by targeting Madrassas.
Accusing AIUDF of doing polarizing politics, the Congress MLA said that, AIUDF was trying to keep Muslims of Assam isolated. (ANI)