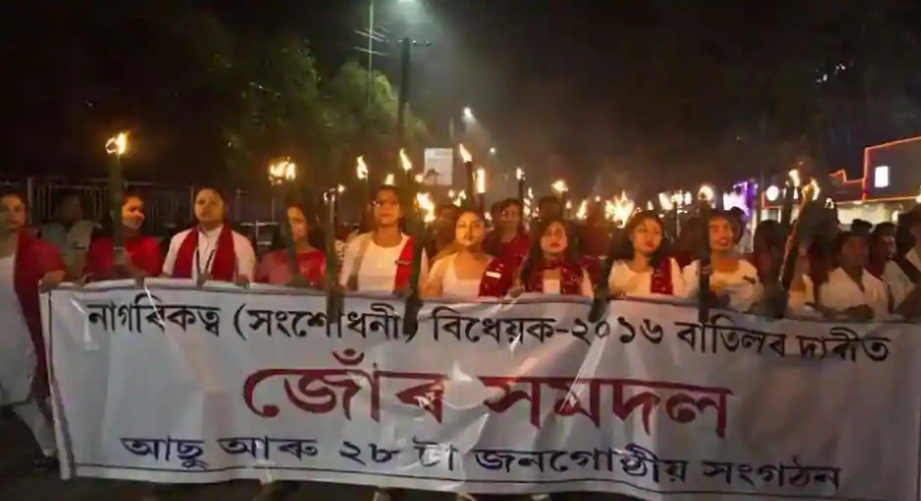 Protests erupted across Assam and ripples were felt in other north-eastern states as the Bharatiya Janata Party (BJP)-led Union government cleared changes to the Citizenship Act, a decision that also prompted one of its regional allies, the Asom Gana Parishad (AGP), to break ties.

The amendment proposes to give citizenship to people from neighbouring countries who are religious minorities there, letting those who have lived in India for a particular period of time be naturalised. This has become contentious because it can potentially inflame ethnic divides in the north-east, where the influx of Muslim immigrants from Bangladesh has been a major issue over the last decade.

“We met [Union home minister] Rajnath Singh today. He said the bill will be passed in Lok Sabha on Tuesday. We had no other option but to withdraw,” said Ramendra Kalita, general secretary, AGP. Earlier, the AGP president led a delegation to the home minister to tell him about their decision to withdraw from the alliance.

In Assam, protesters burned copies of the legislation in angry marches, and announced a shutdown for the region on Tuesday — the first serious threat to the BJP.

The BJP has emerged as the biggest party in the north-east over the past two-and-a-half years.

The BJP’s now estranged ally, the AGP, has its roots in the 1985 Assam Accord, which stated that anyone who entered the state after March 1971 would be seen as an illegal immigrant and should be deported.

The AGP has 14 legislators in the 126-member assembly. Its withdrawal will not affect the state government’s stability as the BJP has 61 MLAs and enjoys the support of the 12 MLA-strong Bodo People’s Front.

The bill will allow citizenship to Hindus, Sikhs, Buddhists, Jains, Parsis and Christians who fled religious persecution in Bangladesh, Pakistan and Afghanistan and entered India before December 31, 2014. To be naturalised, applicants must have in India during the 12 months leading up to December 2014 and for 11 of the 14 years prior to that.

Headed by BJP’s Rajendra Agarwal, the JPC added “the considered view that since the matter is still subjudice, the government have to tread with caution and take recourse to all legal precautions lest it causes embarrassment at a later date.”

The committee, its report added, also believes the primary objective of the Assam Accord to protect the cultural, social and linguistic identity of the Assamese would not be impeded by the new law.

According to the Congress, the bill would create ethnic divisions in not just Assam but the entire north-east and could lead to a resurgence of extremist groups. Assam BJP president Ranjit Dass refused to comment but general secretary Dilip Saikia said the amendment was a national commitment by the party. “It will have some impact on our fortunes but we are hopeful people will eventually see the good work done by the Narendra Modi government,” he said.

In Assam, several organisations staged protests, with demonstrators in some instances stripping naked to protest against the bill. Protesters shouted slogans against Prime Minister Narendra Modi and chief minister Sarbananda Sonowal and two of the north-east’s biggest students groups — the North East Students Organisations (NESO) and the All-Assam Students Union (AASU) — announced a shutdown on Tuesday.

“We are going to support the NESO bandh. Mizoram will be completely shut. We are vulnerable if people can get citizenship so easily. Mizoram has immigrants from Bangladesh and Burma (Myanmar),” Zoramthanga, Mizoram chief minister and president of the MNF told HT, adding the proposed amendment will encourage illegal immigration.

“We as a state government have passed a resolution in the cabinet (against the bill) and that is the most aggressive stand any government has taken,” Meghalaya chief minister Conrad Sangma told journalists on Monday evening.

Asked if the NPP will withdraw support to NDA, Sangma said, “Our side we have been clear to NDA government that this is something we will not support. We will see when the time comes but as of now we have made our stand clear we are not supporting this amendment bill.”

Meanwhile in Nagaland, the cabinet of the NDPP-BJP alliance government decided to request the Centre to reconsider the Bill.