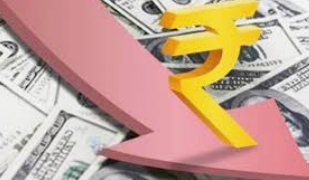 In the early trade on Monday, rupee gets down to 67.87 from it’s previous close 70.08 against U.S doller at the inter bank foreign exchange .

According to the forex traders, besides increased demand of the U.S currency from the importers , the value of doller against a few other currencies caused this fall in Indian Currency this week.

Adding to this, forex traders also mentioned that the increase in crude oil prices and foreign fund outflows are two of the major causes of this fall in the Indian currency.