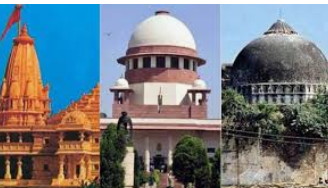 The Supreme Court of India on Monday decided it’s final verdict on the Ram Janmabhoomi- Babri Masjid case for January next year.

According to sources, a bench made of 3 judges including Chief Justice Ranjan Gogoi said that they would decide the final date of fixing the Ayodhya land dispute case in January next year.

Earlier a three judge bench refused to refer to a five judge constitutional bench regading reconsideration of its 1994 High Court judgement , where it was mentioned that mosques were not integral parts of Islam.

Around 14 appeals were filed against the 1994 High court judgement on the land dispute case , following which in 2010 its 2.77 acres of land was divided in three parts between Sunni Waqf board, the Nirmohi Akhara and Ram Lalla.

Considering everything in regard to the dispute, the bench on Monday decided to announce its final hearing on the case in the first week of January 2019.