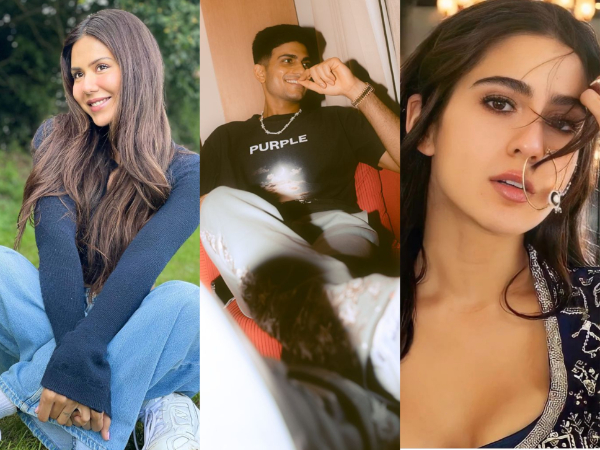 Punjabi actor Sonam Bajwa recently refuted the rumours of her dating the Indian batsman Shubman Gill and teased the cricketer about his rumoured girlfriend Sara Ali Khan.
Shubman recently came into the limelight after hitting a double century against New Zealand on Wednesday.
After the match, several social media users took to their accounts and congratulated him for his amazing knock, meanwhile many of them teased the Indian batsman with his rumoured girlfriend, Sara Ali Khan’s name.
Many funny memes surfaced online, a user named Xavier Uncle shared a picture of Shubman with Punjabi actor Sonam Bajwa and wrote, “reason behind Gill’s back-to-back hundreds.”
Reacting to the post, the ‘Sardaar Ji 2’ actor wrote, “Ye sara ka sara jhoot hai,” followed by a laughing emoticon, and teased the Indian batsmen for his rumoured linkup with the ‘Atrangi Re’ actor.

Shubman recently appeared on Sonam Bajwa’s chat show ‘Dil Diyan Gallan’ and during the conversation that followed, the Punjabi actor questioned the cricketer on who was the fittest Bollywood actor?
To this, he answered, “Sara”.
Following his revelation, Sonam asked Shubman whether he was dating the actress, to which he replied, “Maybe.”
Punning on the name of the Bollywood beauty, the Punjabi actor then asked him to reveal the truth saying, “Sara ka sara sach bolo (Tell the whole truth).”
To this, Shubman replied, “Sara da sara sach bol diya (I have told the whole truth). Maybe, maybe not.”
Rumours about Sara and Shubman dating started circulating in August this year after they were spotted having dinner together.
A Tik-Tok user shared their video on social media and it went viral.
The viral clip received a lot of attention from fans who were curious to know more about their relationship status.
However, neither Sara nor Shubman confirmed their relationship. (ANI)