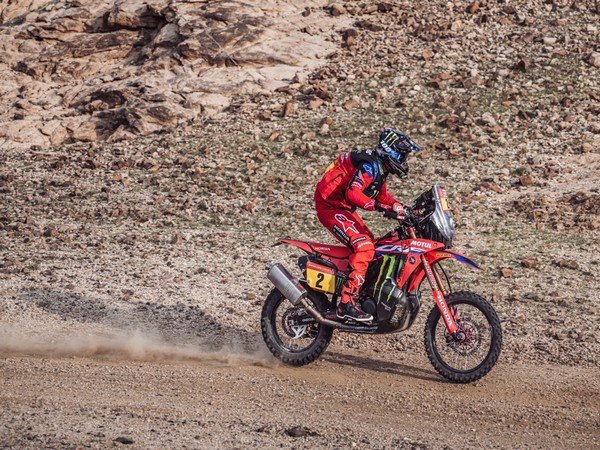 It was certainly a good day for the riders of the Honda Team! Special stage number one at the Dakar Rally 2023 brought 369 kilometres of action throughout sandy and stony tracks, with a start point and arrival at the Sea Camp bivouac – close to Yanbu (Saudi Arabia). American Ricky Brabec was the stage winner on a day when all team riders were in the spotlight.

With this result, Brabec – the 2020 Dakar winner – gets into the first position in the overall standings. Pablo Quintanilla (Chile) was seventh, Adrien Van Beveren (France) was ranked ninth and Jose Ignacio Cornejo – who had the hard mission to open the stage – finished in 10th place in this first stage.
On Tuesday the second stage from this year’s Dakar Rally will leave the Sea Camp in the direction of Al-Ula. This special stage will have 430 kilometres of closed tracks demanding great handling skills, so riders will get mainly dirt tracks (59%), stones (26%) and just a little taste of sand (14% sand tracks and one per cent of dunes). Besides this competitive section, there is also another 159 kilometres of liaison.
“I know we are just starting, but I have to say I feel really proud of our team. All riders performed incredibly well and the results are there. All the team is feeling good and are doing the right steps. We have been here before and will continue to fight for consistency in the days to come,” Honda’s General Manager Ruben Faria.

“Goal number one was not to open the stage. I feel quite well and confident after today, but I will just try to go day by day, keep pace and stay in the Top 10. It’s going to be hard to be out of the lead – like we saw today – but we have to see how it goes until the rest day. Today was fairly simple, no stress, it was a great day! ” said Honda rider Ricky Brabec.
“We have started the morning with fast valleys and river beds with many stones, so the first section was quite challenging. I enjoyed the second part, after the first neutralization where we had faster tracks and sand in the open desert. I felt good, quite fast and with a good rhythm,” said Honda rider Pablo Quintanilla.
“At the beginning of the stage I was struggling to look at the stones kind of hidden in the sand. In the second part of the stage I was really better – I am happy with my performance and want to keep riding this way along the rally,” Honda rider Adrien Van Beveren.
“Today was a day that could have gone really bad because I had to open the stage. I did my best and in the end, the outcome was great. I liked the navigation, I was not too confident because when you are you can make mistakes – so that was a good spirit and way to face these circumstances,” Honda rider Jose Ignacio Cornejo.
Navigation will be key as participants reach the splendid canyons and beautiful landscapes near the finish. According to the ASO organisation, the stage will be decided on the dunes, with some of the majestic Nabataean temples visible on the landscape. (ANI)