The 21st National Fish Farmers’ Day was observed in a befitting manner at Jungal Balahu Fish Farm at Raha in Nagaon district on Saturday.

Synchronizing with the event, some selected progressive fish farmers were felicitated for their outstanding contributions to the field of fishing farming ventures. Speaking on the occasion, Chief Guest, Minister for Fisheries, Parimal Suklabaidya said, “It was during the tenure of the NDA Government headed by Prime Minister Atal Bihari Vajpayee and Prime Minister Narendra Modi that the fisheries sector got top priority. He said PM Modi has acknowledged fish as an asset and that itself is a matter of great pride and satisfaction for the fish farmers of the country. Unlike in the past, fishing is no longer a neglected sector,” he said, adding that the BJP led Government in Assam has been making concerted efforts to make use of the vast water resources of the state to increase fish production.

Suklabaidya lauded the fish farmers for their commendable contributions towards food and nutritional security of the state and the country as a whole. “I extend my heartiest greetings and best wishes to the fish farmers of the State. I also appeal to the youngsters to come forward and take up fish farming as a lucrative venture,” he quipped. The Minister thanked the fish farmers for their outstanding contribution towards quality animal protein into the food basket of the country.

Recognizing the unmatched hardships and perseverance of the farming community, Suklabaidya thanked the farmers for adopting the latest technologies like Biofloc and Cage Culture to increase production.

Congratulating the fish farmers on the occasion, Deputy Commissioner, Nagaon, Kavitha Padmanabhan, said the fisheries sector in the district is making good strides and the district has attained self-sufficiency on the fish production front. “25 per cent of fish is exported from the district to other parts of the state and the North-East part of the country,” she said, adding that the district was awarded the best district in the country in the World Fisheries Day event last year.

She said the farmers have come forward to adopt the latest technologies, including Biofloc technology to enhance production and income. Padmanabhan said fish production will get a major boost with the coming up of a fish feed mill in the district which will help to cut down transportation costs.

Padmanabhan appealed to the Minister to develop the historic Jungal Balahu Fish Farm as an eco-tourism spot with angling and boating facilities and also a fish museum for children. 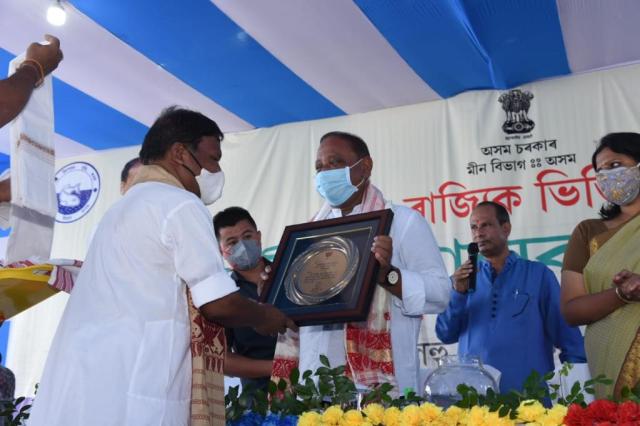