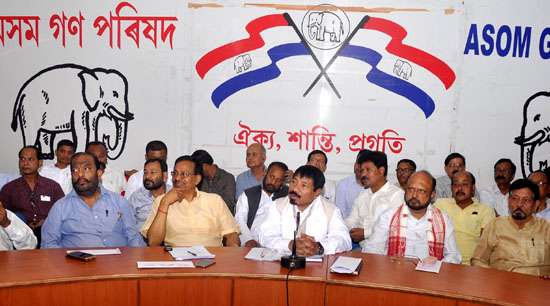 GUWAHATI, Feb 20 – Asom Gana Parishad (AGP) is still undecided on electoral alliance. Its central executive committee today formed a seven-member panel to determine the party strategy and to suggest as to with whom the regional party should go in the coming Lok Sabha elections. The regional party severed its alliance with the Bharatiya Janata Party (BJP) recently on the issue of the Citizenship (Amendment) Bill, 2016.

AGP general secretary (administration) Dr Kamala Kalita told this newspaper, following the party’s central executive meeting this evening, that the issue of Lok Sabha elections was discussed at the meeting. But it could not arrive at a decision as to whether it should enter into any alliance with some parties or go it alone in the Lok Sabha elections.
Therefore, the meeting formed a seven-member committee to suggest the strategy of the party in consultation with the party district committees and leading personalities of the State, for the Lok Sabha elections. Party general secretary (election) Ramendranarayan Kalita has been named convenor of the committee. Other members of the committee are – Atul Bora, Keshab Mahanta, Phanibhusan Choudhury, Dr Kamala Kalita, Birendraprasad Baishya and Pradip Hazarika.

The committee has been asked to place its suggestion in this regard at the earliest, said Dr Kalita.