Guwahati: The Congress on Saturday released its first list of 40 candidates for the upcoming three-phase election for the 126-member Assam Assembly.

Polls to the 15th Legislative Assembly polls in the state will begin on March 27 as per the schedule announced by the Election Commission of India with counting slated to be held on May 2. 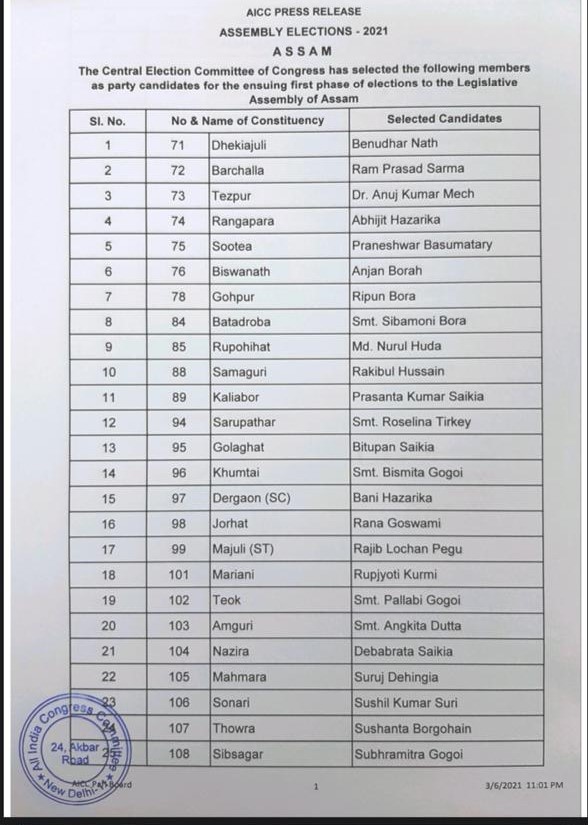 The Bodoland Peoples’ Front (BPF) has also broken away from the BJP-led alliance to join the ‘Mahajath’.

The Bharatiya Janata Party (BJP) had on Friday released the first list of 70 candidates for the elections. In the last assembly election in 2016, the BJP scripted history and formed the government for the first time in Assam ending Congress’ 15-year rule led by former chief minister Tarun Gogoi.

The term of the 14th legislative assembly of Assam is up to 31 May 2021. The Assembly elections for 126 seats will be held in three phases starting from March 27.

The first phase of notification is March 2 and 47 seats in 12 districts will go to the polls.

The last date of nomination March 9 and the date of poll is March 27. In the second phase, 39 constituencies in 13 districts will go to the polls on April 1.

A total of 41 constituencies in 12 districts will go to polls on April 6. (ANI)