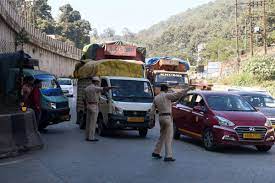 Assam on Friday continued to ‘advise’ people from the state not to travel to Meghalaya as the “situation is not very good” following a clash in a disputed border area between the two neighbouring states in which six persons were killed four days ago.

The situation at the clash site in West Karbi Anglong district continued to remain tense but under control with security forces ensuring no further flare-ups, official sources said.

Restrictions under CrPC section 144 also remained in force in the area, they added.

“Yesterday in Shillong, the public burnt police vehicles. The situation is not very good. That’s why we are advising people not to travel, especially people from Assam,” deputy commissioner (East) of Guwahati Police Sudhakar Singh told PTI.

He said non-Assamese people have been travelling to Meghalaya, but they are being asked to go in vehicles that do not have Assam registration number plates.

“The advisory (on avoiding travel to Meghalaya for people from Assam) remains,” the officer added.

Cachar superintendent of police Nomal Mahatta also said similar restriction on people and vehicles from Assam entering Meghalaya through his district also is in force.

“People are being held up due to it. But the route passing through Dima Hasao district is being used by commuters,” he said.

“For people from Meghalaya who needed to return, we arranged for vehicles from across the border,” Mahatta added.

Meanwhile, the last rites of the slain forest guard, the only person from Assam killed in the violence, will be conducted at his native village in West Karbi Anglong district on Friday.

The body of the Forest Protection Force personnel, identified as Bidyasing Lekhte, was handed over to Assam officials on Wednesday night by Meghalaya authorities in West Karbi Anglong district.

The local authorities conducted another post mortem and handed the body to the family on Thursday.

Six people, including a forest guard, were killed in violence at a disputed area along the Assam-Meghalaya border in the early hours of Tuesday, after a truck allegedly laden with illegally felled timber was intercepted by forest personnel of Assam.

Following the incident, a forest and the beat office were burnt down by villagers of bordering Mukroh in West Jaintia Hills district of Meghalaya.